I’m not big on charity knitting because often it’s much more sensible to donate money that can be used to support more tangible aid (witness the story of the penguin sweaters). But Knitting Bee, one of my local yarn shops (there are so many in the Portland area!) was doing a drive for teddy bear sweaters at the same time that a friend of mine was trying to get rid of a bag of free wool, so I decided I’d participate!

Here’s the finished sweater on the bear who went to Camp Erin, on display in the shop: 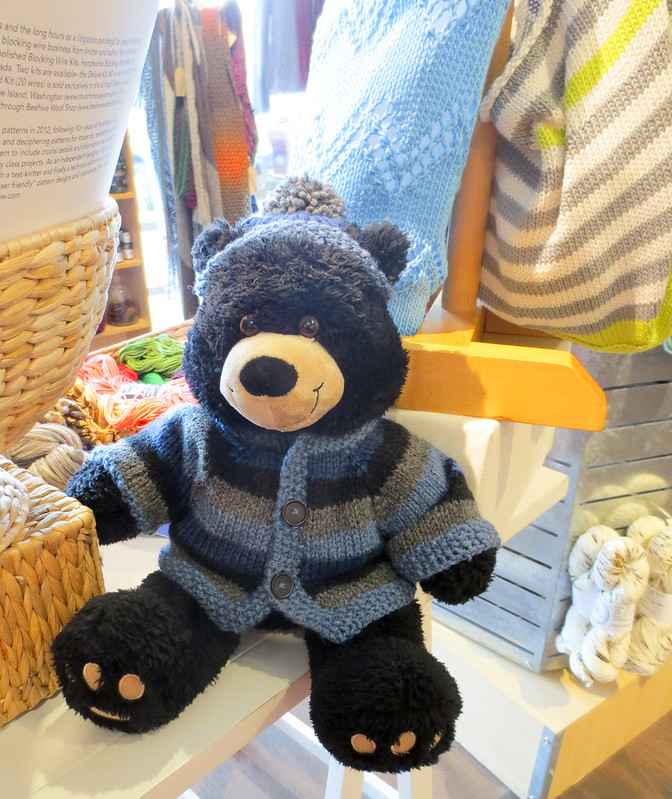 This is a variation on Mr. Bear’s Top Down Cardigan, Hat & Scarf from Knitting Bee (Mr Bear’s Cardigan on Ravelry). I just made the modifications as I was knitting a sweater for Knitting Bee’s charity drive. The variation is nothing too fancy, but I thought I’d write it down in case I ever want to duplicate it. 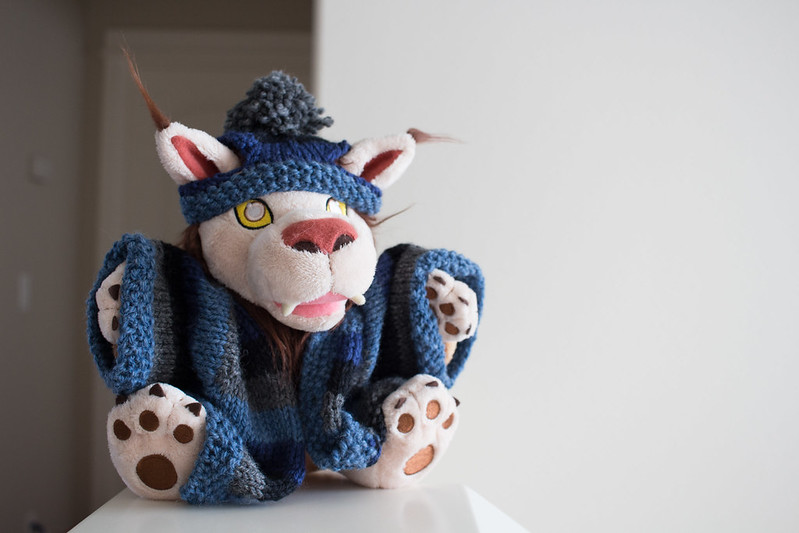 I’m happy to have you use this variant sweater in any way you want, but do note that the original has a line at the bottom saying it was made to support Camp Erin, not for commercial purposes, so you go according to your feelings on the matter.

I used 4 colours, two blues, one grey and one black.
I’ll call the light blue one the edge colour or EC in the pattern below. 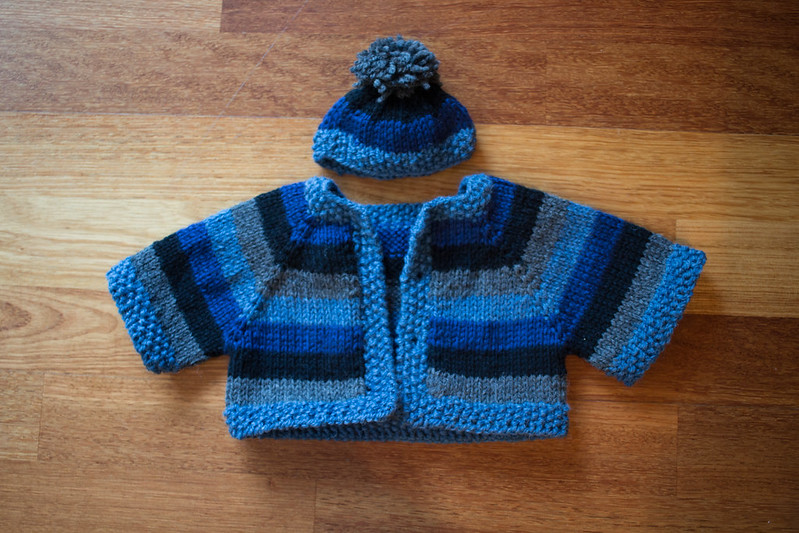 Row 7 (wrong side): (P1, K1) twice for edge in EC then switch to stripe colour
In stripe colour, purl, slipping markers, until the last 4 stitches.
Switch back to MC for other edge then (p1, k1) twice

Row 8 (Right Side): (k1, p1) twice, then K to one stitch before marker. Increase by knitting front and back in stitches before and after each marker, knit other stitches up until last 4, (k1, p1) twice. (increase by 8 stitches)

repeat rows 7-8, changing colour every 5 rows, until you have 5 stripes.
(Work should measure around 4.5″)

Continue to knit body as established only without increasing. I added two more stripes (~1.5″). Shorter bears probably only need one.

Switch entirely to edge colour for final edge.
k across for one row.
Last 5 rows: (K1, P1) repeat (or vice versa) for seed stitch. If you missed an increase somewhere, you may need to k2tog so that the front bands line up with the bottom seed stitches.

Bind off loosely. I use the following bind off, but any loose one would do:
k2tog, slip bound stitch back to 1st needle, repeat until all stitches are bound off then pull through the last one.

Transfer held sleeve sts to double pointed needles or magic loop. Attach yarn and knit all sts; join for knitting in the round.
I knit two more stripes at this point, but a shorter teddy probably only needs one.

Switch to edging colour and work edge in seed stitch:
k around once
then (k1, p1) around until you have 5 more rows. You’ll need to k2tog at the end of the first round to make the seed spiral around nicely.

Weave in all ends. 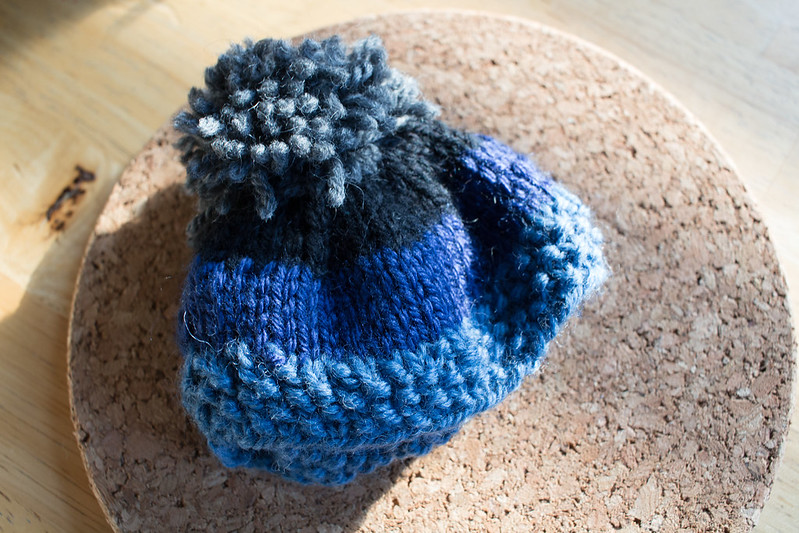 Same deal with the stripes applied to the original hat pattern. (I didn’t take detailed notes, but you can probably figure it out from the pictures. If you’re trying to duplicate this and need help, please feel free to ask!)

Here’s a few more snaps of the sweater, modeled by one of J’s stuffed toys: 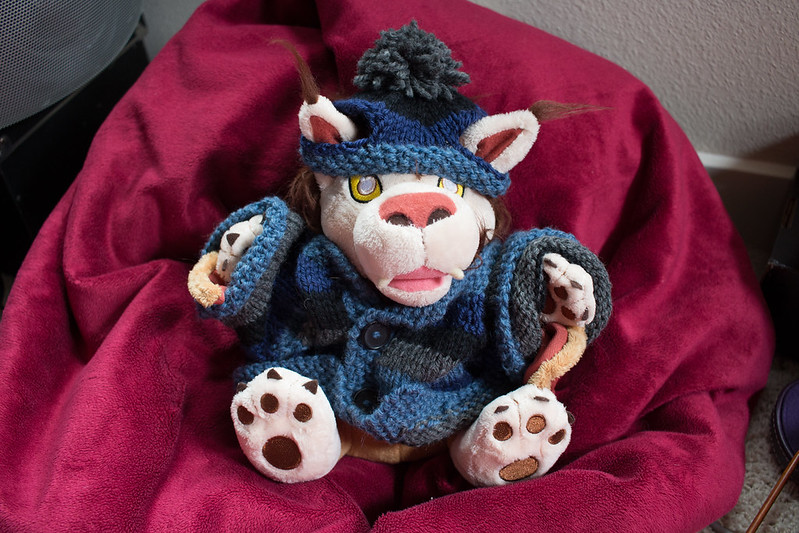 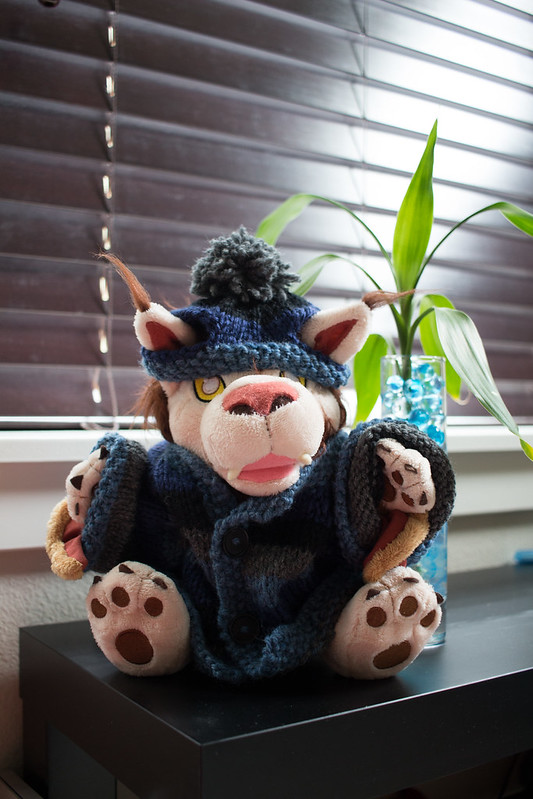 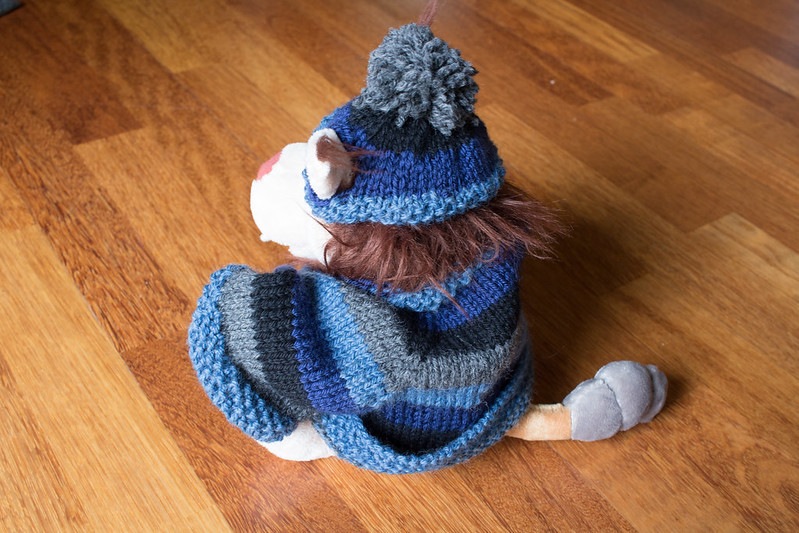 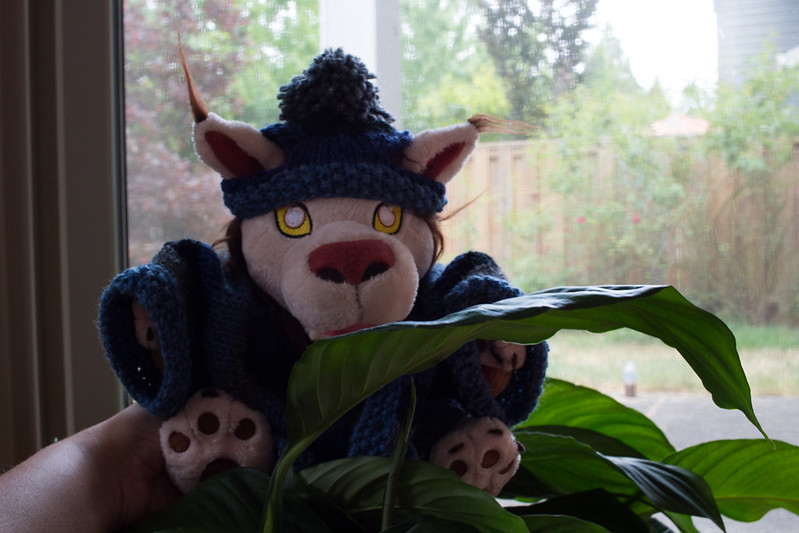