I actually did complete this hat before giving it to M for Christmas 2013, but apparently I can’t find pictures of it (or the kraken hat I made for S the same year), so instead you get this one photo of it with only one side completed: 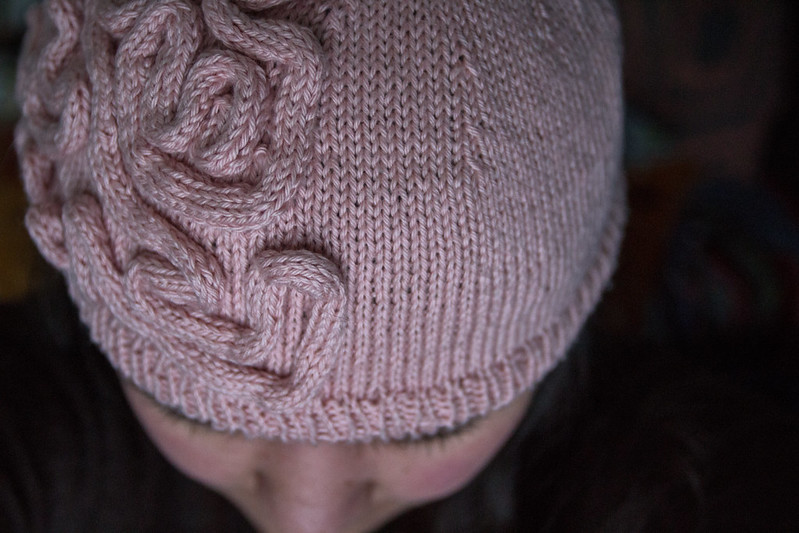 BTW, I chose the title for this post because of my half-finished picture. But for those of you who don’t know, the whole “right brained / left brained” thing is kind of BS and you might want to read up on it. The myth comes from some research on epileptic patients where the two halves of the brain were severed and they don’t seem to generalize to humans with normally connected brains.

From the article linked above (because I’m not looking up pubmed for a knitting post):

“It is not the case that the left hemisphere is associated with logic or reasoning more than the right,” Anderson told LiveScience. “Also, creativity is no more processed in the right hemisphere than the left.”

Anderson’s team examined brain scans of participants ages 7 to 29 while they were resting. They looked at activity in 7,000 brain regions, and examined neural connections within and between these regions. Although they saw pockets of heavy neural traffic in certain key regions, on average, both sides of the brain were essentially equal in their neural networks and connectivity.

(tl;dr: Brains are much more versatile than pop culture might have you believe.)

So there’s your science tidbit for the day. Let’s go back to talking about knitting.

This is a pretty simple pattern: make a skullcap, put a lot of i-cord on it. But it’s worth buying yourself a copy of the pattern because it includes a bunch of pictures of the hat in progress and finished, as well as photos of brains and insight on how to make it look good. I definitely felt like I got my $5 worth and had a much better hat for it!

I made the brain hat for M, who’s allergic to animal fibers, so I was somewhat limited in my choices of yarn. I think I used knitpicks comfy, which is a cotton-acrylic blend that’s quite nice to work with (soft and a little more stretchy than straight cotton). This worked pretty well, to be honest, but doesn’t make for the warmest of hats. This makes it not so great as an all-winter Canada hat, but ok for warmer climates or indoor costume use.

If I did this again again, I’d probably make 50% more brain icord and take more time pinning it to be absolutely perfect. I just didn’t allot quite as much time as I should have before xmas so I was frantically making this on the plane to Ottawa and at my parents’ house before it got packaged up as a present.

Overall, though, a fun pattern and one I’d be happy to make again, given a lot more time or a knitting machine that produced icord.