I helpfully told my friend Adric that these cupcakes were my way of doing human testing without requiring IRB approval. Remember kiddies, experimental cupcakes are only one step away from mad science because my guinea pigs generally consent to the experiment! 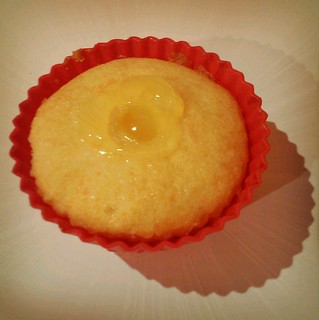 Figure 1: Lemon Googe Cupcake without icing. Note the “clever” use of bad filter in attempt to disguise poor quality cell phone photo, as per cultural norms in a post-instagram world

These come in three parts; some assembly required. I made up the recipe as a whole based on my recollection and modification of recipes in my head / recipe card box, with some inspiration from the filled cupcakes in Vegan Cupcakes Take Over the World (although this is not a vegan recipe).

Cream butter and sugar together; add egg, vanilla, lemon zest and milk and stir well.
Add baking powder and flour and stir until smooth (but no longer).
Spoon into cupcake liners (or I use silicone molds), filling about halfway.
We made 16 cupcakes, you might want to fill a bit higher to get 12.

The name comes via my Ottawa friends: for some reason we decided that “googe” best described the texture of those little gel cup sweets that are considered to be a choking hazard in the US. This nomenclature would probably have died out, but one of my friends was severely grossed out by the word, so we have used it to describe anything of a given gooey texture ever since.

You’ll note that this is more or less a lemon pie filling recipe, omitting the egg, or a slightly gooey lemon pudding.

Mix together cornstarch and cold water, then add mixture to hot water along with lemon juice and sugar and stir well. Heat in microwave repeatedly (around 30-45s per time), stirring after each heating, until mixture is thick and no taste of cornstarch remains. You can probably nuke it longer between stirrings, but if it boils once it’s thicker it might splatter all over your microwave, so keep an eye on it. Add food colouring, because normal lemon pie filling gets its colour from egg yolk and you want people to immediately think “lemon” and not “what the heck?” as they might have if you had allowed your lovely assistant to use the blue colouring like he wanted.

If you are making mini cupcakes or just don’t plan to lose as much to taste-testing for the sugar, you can probably halve the googe recipe. Or you can allow people to dip the cupcakes in the remaining googe like some sort of weird fondue; I don’t judge.

You can add sugar after the fact if you think it needs more — it’ll dissolve, and no one minds getting a blob of icing sugar. You can’t do this with the cornstarch, though. 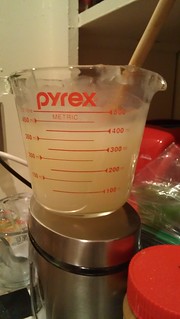 Figure 2: A metric ton of lemon googe, prior to colouring. (Well, ok, it’s 400ml rounded up.) This may be an excessive amount of googe for a single batch of cupakes; see experimental notes below.

4 oz regular cream cheese (half a package usually. Don’t use the spreadable stuff.)
1/4 C butter
1 tsp vanilla
Around 2 C icing sugar (or however much it takes until the consistency is correct)

I suspect you’re supposed to plan ahead for this and soften the butter and cream cheese in advance, but what I do is nuke those suckers together ’till they’re practically liquid and easy to stir (around 1 min), then add vanilla and sugar ’till it’s a slightly goopy icing consistency, and let it firm up as it cools. This strategy actually does make it easier to deal with the final icing in this case, since it’s easier to spread when a bit more liquid-y, but your mileage may vary.

You could probably put some lemon in here too, but at this point that seems like overkill.

Get an icing bag with a metal or plastic tip (sorry, this is one time that cutting the corner off a plastic bag probably isn’t enough). We’ll be using this to fill the cupcakes with lemon googe.

I chose a slightly too big tip, so my googe was spilling everywhere, and the lazy “I’m not sticking my hand in there to get a new tip because our kitchen sink broke this morning” solution was:

I had my lovely assistant do this part so it wasn’t bad for me at all, but you might want to save yourself the trouble and not use the largest icing tip you have on hand. 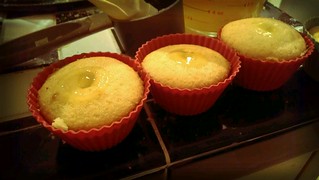 Figure 3: Lubricated lemon cupcakes. I’m pretty sure this monkier is not going to impress the friend who hates the word googe, but it’s more alliterative so it can be the alternate recipe name. Note the tools in the background include googe, an icing bag, and a place to put the icing bag so it doesn’t googe all over the counter.

You now have a cupcake with a gooey hole in it. I will refrain from juvenile jokes, but this may be the point where you’ll be really glad you used the food colouring so your lovely assistant will not think of juvenile jokes.

Cover your googe-filled cupcakes with cream cheese icing. This will be challenging because you’re basically holding a lubricated cupcake and the icing will slide off the hole in the center. Having experimented with this, I can tell you that it is easiest to ice the outside and then cover the googe last. It’s also fun to slime the top of the cupcake and layer the icing on that, which will add extra lemony goodness but is also really messy. 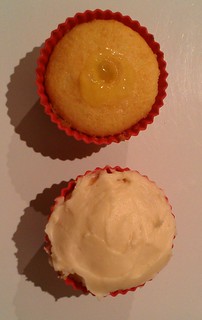 Hypothesis: lemon googe, if inserted into the cupcake 24h+ in advance, will suffuse the cupcake making it more delicious.

Method:
16 cupcakes were created in the initial batch.
2 were assembled and eaten immediately and declared delicious by both experimental subjects J and T.

The remaining cupcakes have been divided into two groups. Group one has been filled with googe and iced and placed in the fridge to age for 24h. After the time has elapsed, two prepared cupcakes will be removed from refrigeration and eaten by experimental subjects J and T. If they are deemed an improvement over the freshly assembled cupcakes, the rest of the batch will be prepared in a similar manner. After 48h have passed, experimental subjects will be able to compare 0-day cupcakes, 24h cupcakes, and 48h cupcakes. If the prepared cupcakes are deemed unsuitable at 24h (likely due to structural integrity failures), then the control batch will be left untouched until shortly before the 2600 meeting which will represent our larger clinical cupcake trial. This will not be a double-blinded experiment, although one could be conducted at a later date to more comprehensively test cupcake saturation over time.

Hypothesis 2: 400ml is way to much googe

Method: 400ml of googe solution has been prepared and will be inserted into cupcakes as described above. If the cupcakes cannot hold this amount of googe, the remainder will be given to the experimental subjects for consumption or further experimentation. We will report back on crowdsourced solutions for too much googe after the clinical trials are complete.

If you wish to participate in this clinical cupcake trial, please attend the 2600 meeting at Quelab on Friday April 5, 2013. Please note that I have not obtained ethics approval for this experiment and you will be participating at your own risk.