Last year at Pycon, I made a bunch of teensy amigurumi penguins to give to the friends who were sprinting on GNU Mailman with me. (Small round penguin ball pattern here) Florian commented some time later that he nearly didn’t get to keep his, as his wife is a huge fan of penguins, so since he had a new baby at home by the time of the next PyCon, I figured I knew what I should be doing: making a small pile of penguins for his family. 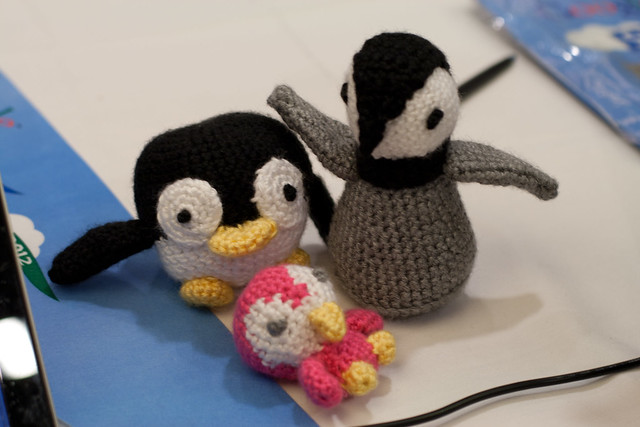 The emphasis was indeed on small since Florian would have to fit them in his suitcase for an international flight but not too small, since they were sort of intended as baby toys. Below you can see a size comparison of the largest one (in proto-penguin form) with a spatula (made unintentionally hilarious later on when the spatula was discovered lying on a pillow in the spare bedroom and questions were asked). 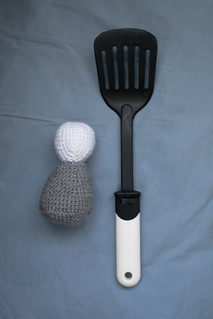 And here’s the smallest one, with my hand for size. It may help you to know that my hands are fairly small — I can just barely play a full-sized violin and would probably be more comfortable on a 3/4. (Well, okay, I haven’t actually played the violin in years, but the point is that I have almost child-sized hands.) 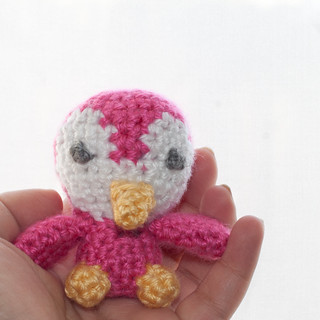 The big round penguin

Amigurumi Penguin by Lion Brand Yarn. I’d made this pattern before, and it’s actually what inspired my small penguin balls from last year. It’s a very easy pattern for beginner crocheters, and you can get a fair bit of expression out of adjusting the penguin’s beak and wings.

Penguin Amigurumi by Tamie Oldridge. This one’s especially fun because he has a little separate hood that you place over the top ball (hence the bowling-pin shaped proto-penguin in the photo with the spatula).

Amigurumi Penguin Cell Phone Strap by Pierrot (Gosyo Co., Ltd). As you can tell from the title, this one was meant to be made with smaller yarn or cotton thread, but I scaled up so it wouldn’t be a choking hazard. People were so entertained by this one that I made a few more at the conference and gave them away too.

Here’s two pictures of one of those little wool penguins, before and after felting, with my apple power connector, watch and ring for size comparison. You can see that it didn’t get that much smaller but it definitely gets fluffier with the hand felting. 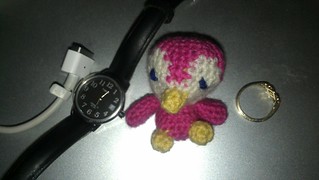 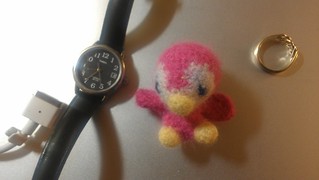 The yarns used for that one were Knit Picks palette yarns, which is one of my staples for travel since I can take small balls and a handful of stuffing and still make cute things. (If you ever feel a need to buy me hundreds of dollars of wool, you can buy a sampler pack with all the colours. I’d use them, promise!)

The felting was done by hand in the hotel using hot water from the coffee pot, a mug and shampoo from those teensy little hotel bottles. Who knew hotels contained everything you needed for hand felting? Heat water without any coffee in the machine, pour a few drops of shampoo on the penguin, dip it in the hot water, roll it around in your hands or scrub at it, rinse, repeat, replacing the water if it gets cold or too soapy.

Finally, here’s one more picture of the big pink penguin hanging out on my windowsill in Albuquerque: 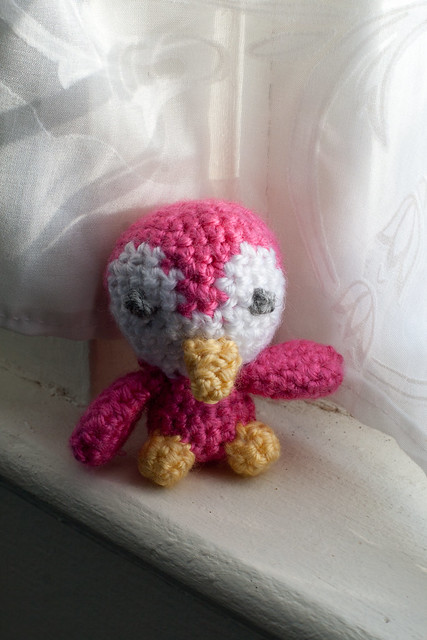