So, remember a while ago I posted about a work in progress? She’s still a work in progress, but while I don’t have full setup for her internal hardware, her chassis did indeed get “finished” in time for ABQ Maker Faire, so here’s a picture of her on my table: 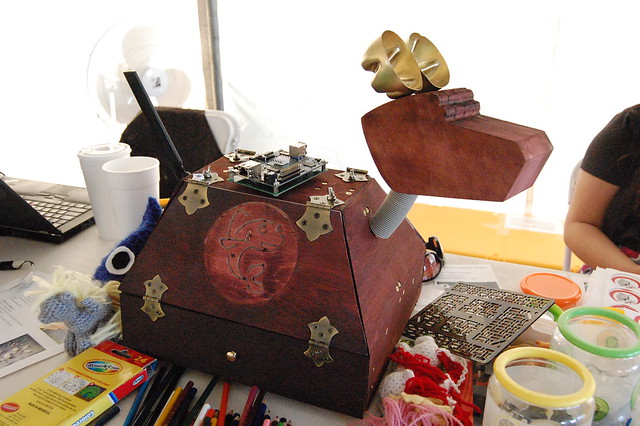 This picture care of the fine folk at Quelab. I’ve kind of forgotten who actually took the picture. You can tell it wasn’t me because that’s my elbow in there!

You know how people joke that building ikea furniture together as a couple is the ultimate test of your relationship? Try designing steampunk robots together! With a deadline looming! I think we did most of this in around 2 weeks, although we had batted the idea around for a while.

The germ of the idea was my fault. I wanted a puppy k-9 who would be less hassle to travel with than John’s full-sized k-9 replica, which weighs over a hundred pounds when you include the 3 pelican cases needed to ship him. And I wanted her to be steampunk, because it would break us away from being show-accurate and make her amusingly photogenic. Her job, by and large, is to convince people to come talk to us, although we have some other functional plans for her too! However, it’s a long path from idea to finished project, and I have to say that John did the bulk of the execution while I handled the details — he got the c&c machine to cut out dog panels and engineered it so I could have the wing doors I wanted without compromising structural integrity, while I convinced the c&c to cut out a modified minnowboard logo for the resin inlay, and figured out the hinges and staining. I admit, we might have done some arguing, but we worked her out!

I am quite pleased with the details we managed to get in. I insisted she have ears and a tail because John’s larger k-9 replica still doesn’t have those details. Her tail is a functional USB wireless antenna, and John even inserted a proper usb port into her butt so it’s detachable when she gets packed for travel or so you can plug something else in easily while leaving the case closed. Her ears gave us a different kind of trouble, and we were running out of time until I started digging through the recycling bin and found a pair of 7-up bottle bottoms which I painted gold.

The computer on top there is the Minnowboard MAX, which will serve as Puppy’s brains. We didn’t get it mounted inside until after the show, and you can see the nice laser-cut mounting plate (again care of Quelab; thanks Morgan!) in front of her (it’s the smokey grey piece with all the holes). That’s all inside now, with a whole lot of hardware attached.

More pictures to come eventually, but since she’s gotten side-tracked by xmas present projects, it might be a while before we get back to her!