This month, I joined a yarn subscription club that No One Talks About on the Internet. So of course, I’m going to talk about it on the internet. I hope I’m not breaking some unspoken rule by telling you about it. Oh heck, who am I kidding? I’ll probably be pleased if I broke some rule. Knowledge for all! 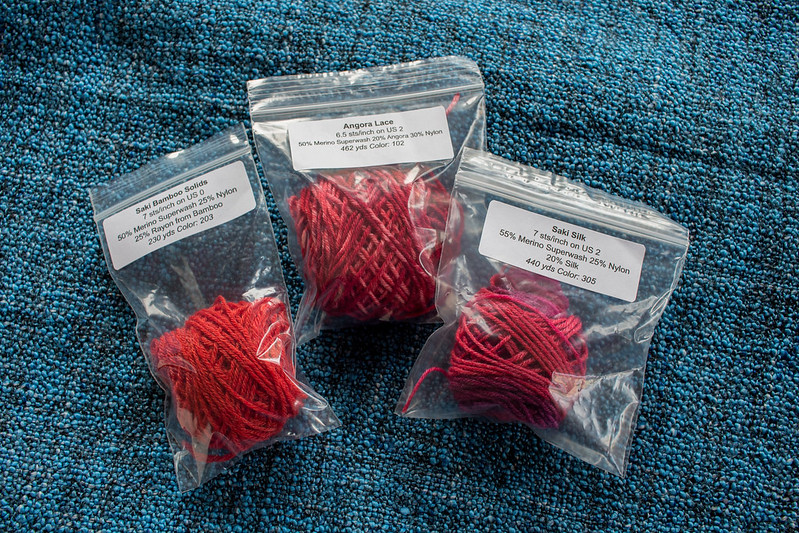 First, though, let’s back up to how I wound up joining this club. I’ve been intrigued for a while by the idea of yarn subscriptions.

On the plus side:
+ Surprise yarn!
+ Trying new things!
+ Learning about new dyers and mills and whatever!
+ Getting some patterns to inspire me!
+ And having enough yarn to complete the projects!

But on the down side:
– Most of the boxes are moderately expensive. Around $40/month is pretty normal, and you can pay much more.
– … so if you hate what you get, you’re going feel like you’ve wasted a lot of money
– I don’t think I actually use 2+ skeins of yarn every month, so it’s going to start to pile up

Some pricing:
Knitcrate has 6 subscription types, ranging from $22.50 for 5 minis/month to $65/month for indie yarns. Likely subscription for me would have been $55 for an intermediate/advanced box.
Yarnbox: $35.95/month, more for the luxe version (presumably)
There are lots of others, but those were the two that came up the most.

In the course of doing some research about options, I encountered Yarn of the Month, which sends out little teensy yarn samples instead of full skeins. Because it’s only a taste of yarn rather than a full meal, it rings in as a $9.25/month subscription (less if you get a few months at once). That hits that sweet spot on subscription boxes for me, where it’s easy to write off a bad month and won’t result in rapidly growing pile of stuff in my life. I’d miss out on some of the advantages, in exchange I’d basically wipe out all the disadvantages I listed, and instead miss out on extras that fancier boxes throw in. (That’s actually kind of a shame because I haven’t been knitting long enough to acquire a lot of the small tools that show up as extras!)

What finally pushed me to the decision brink was the assertion that you’d be able to do little 5 inch swatches from your teeny yarn balls, and put them together to have a blanket at the end of the year. So it wouldn’t even be a pile of craft clutter when I was done admiring them, and I’d be motivated to actually *use* the yarn. Awesome!

What to do? I contemplated for a bit, then figured I could afford to try it out and see what happened. But in the interest of helping others, I was darned well going to post some pictures when (if?) I actually got a shipment!

So here’s a review. Hopefully the lack of posts about the yarn is a lack of social media marketing rather than a sign that I have paid money into some sort of mysterious yarn cult that will be upset at this breach of unspoken social etiquette.

First, let me show you the yarn again on a different background to give you a sense of colour: 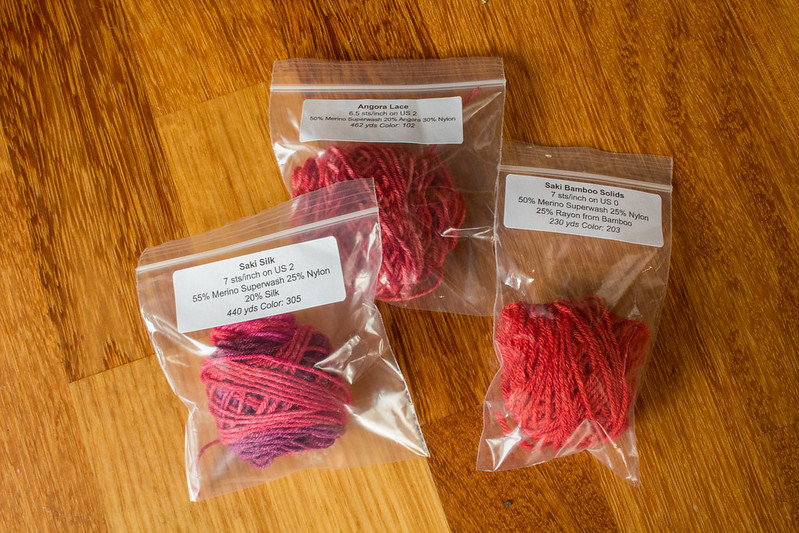 I guess February was kind of red themed for valentine’s day.

Not pictured: the February Socks pattern from Birgitte Zeuner and instructions for 3 square swatches. Frankly, they’re printed on thin US letter paper and just not that attractive as a photography subject after being mooshed through the mail. Totally legible, but I might have invested in stiffer paper if I were running YOTM.

The February Socks pattern looks cute enough. I would have liked better pictures, but obviously I can find them on Ravelry so that works out.

Unfortunately, having just finished my first pair of adult socks, I’m not actually that excited about starting another one, so I think this is getting shelved indefinitely. I’m going to have to find a binder I can put these in! Maybe I’ll find a friend who’s super excited about this and I can pass it on, though. 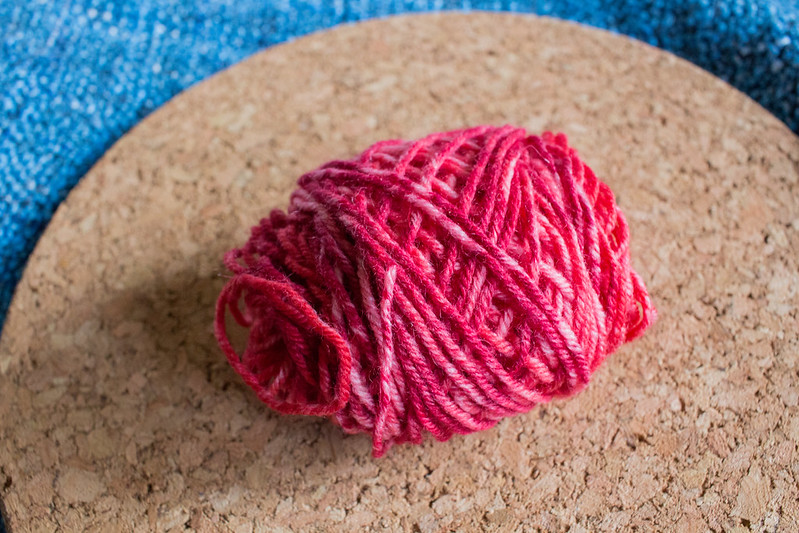 This is soft and lovely in the ball as one would expect for Angora, and quite pleasant to knit with. It’s not fluffy and doesn’t seem to shed (ask me about my experience knitting pure angora bunny fur sometime) but instead just results in beautifully soft yarn. It’s tightly wound enough that it doesn’t split on those little size 2 needles, and it held up to some unknitting as I tried to end my swatch as close to the end of the ball as possible and mis-calculated. 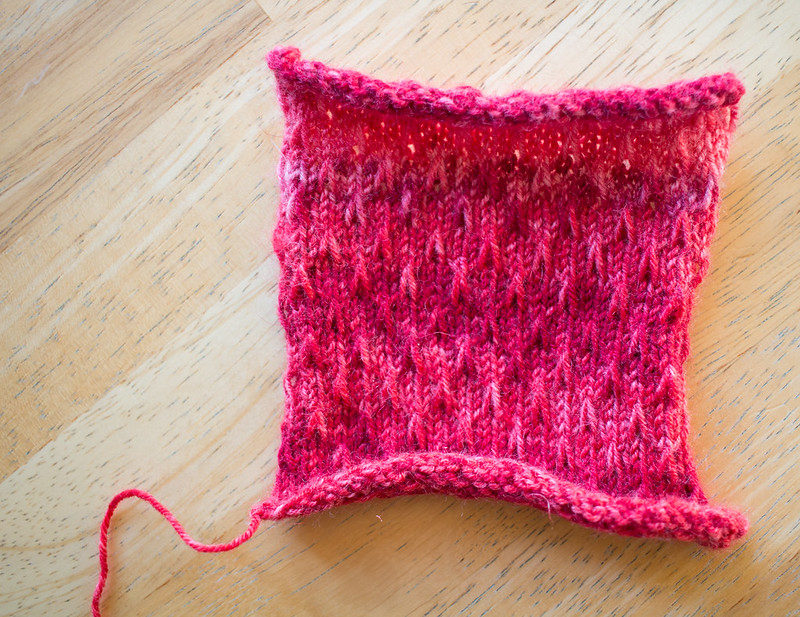 It’s not the easiest thing to photograph since it is subtly fluffy and catches the light a lot, but that’s only annoying for the purposes of this post and not in general. (Actually, I’d totally be into anti-photography yarn… I should work on that with some retroreflective stuff.)

The swatch pattern provided uses double-wrapped knitting stitches, a technique I hadn’t tried but a video tutorial wasn’t too hard to find. I actually usually prefer non-video tutorials, but this one is short and clear. You put the needle through as if to knit then wrap the yarn twice instead of once around and knit those, leaving two loops on. then when you come across it in the next few rows, you don’t bother trying to keep those doubled but instead slip stitch through them, leaving you with one longer stitch floating over the fabric.

Here’s one regular vs one weirdly processed photo to show you the floating stitches: 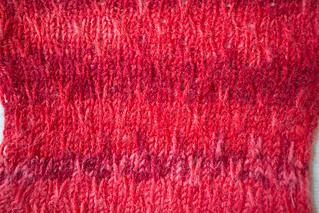 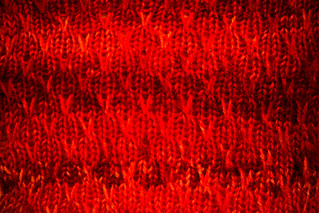 The finished piece is super soft and pretty light. I suspect it’d be pretty warm, but it’s hard to tell with just a swatch! 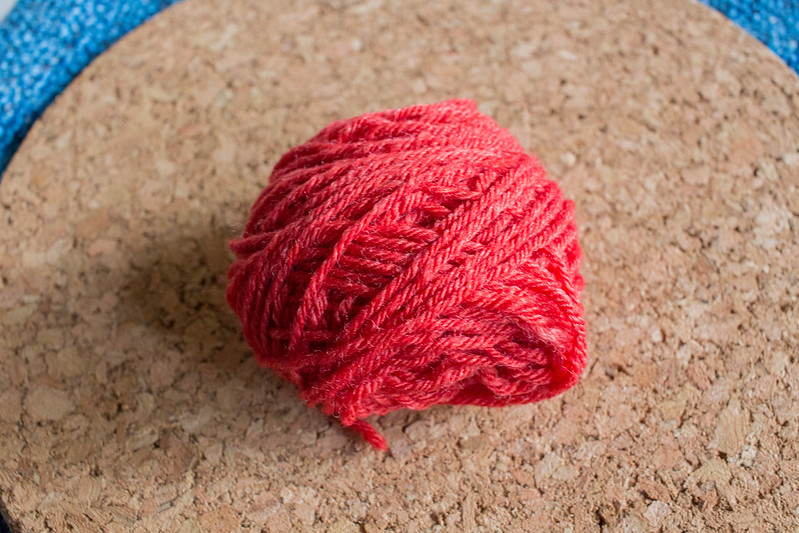 This one feels great in the ball, all silky smooth, but I found it actually a bit odd to work with. While I’m knitting it, it has that sort of squeaky/roughish feel that I associate with some acrylics, even though the finished piece feels nice.

I was so pleased when I figured out the swatch pattern:

I’m thinking that I might see if I can incorporate this into the hem of a baby sweater in the near future. I’m not sure I’d buy this yarn, though. It wasn’t hard to work with and it does as promised have great stitch definition, but with so many yarns in the world “feels a little weird to knit” is enough to drop it off my personal to-buy list. I’ve never knit with bamboo before so I don’t know if that’s a function of the fiber or if I just didn’t love this particular blend, but I suspect the latter so maybe I’ll try some other bamboo blends out. 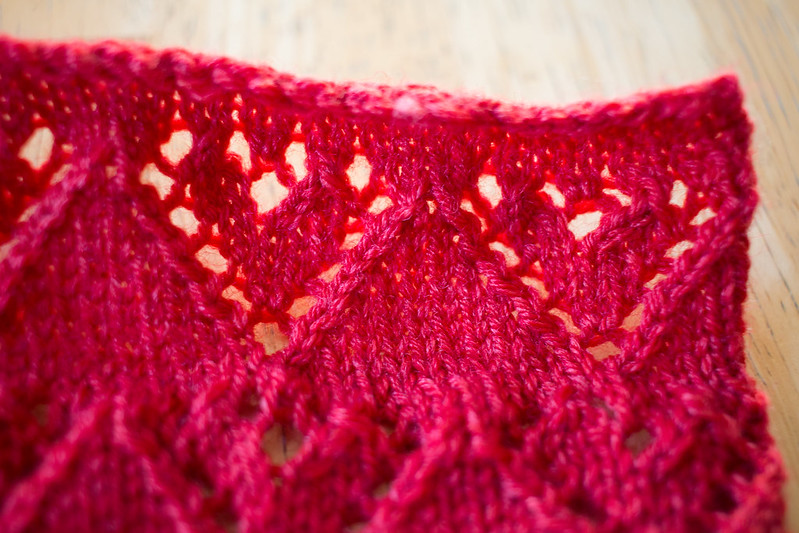 And finally here is is, blocking on my chair, so you can see the repeats better: 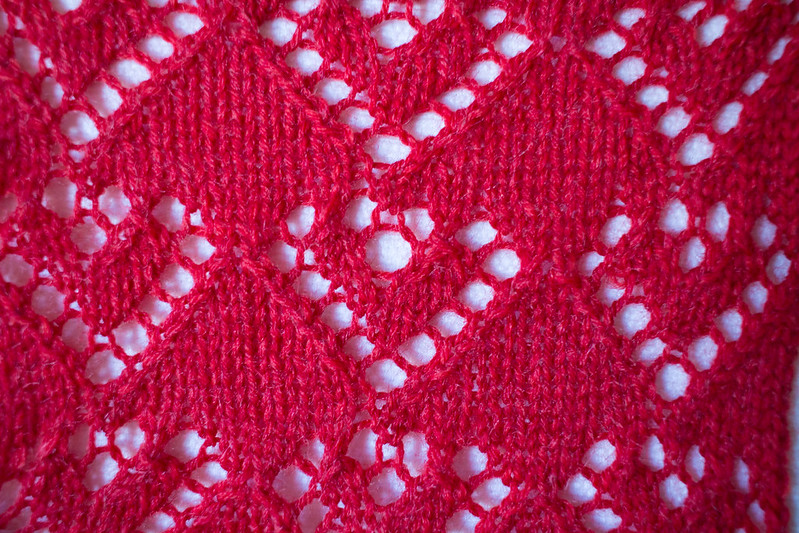 The finished, blocked piece is smooth and very light, so it might be a great for summer knits. To be honest, I like the stitch pattern best when it’s a single row, but the swatch was still fun to do! 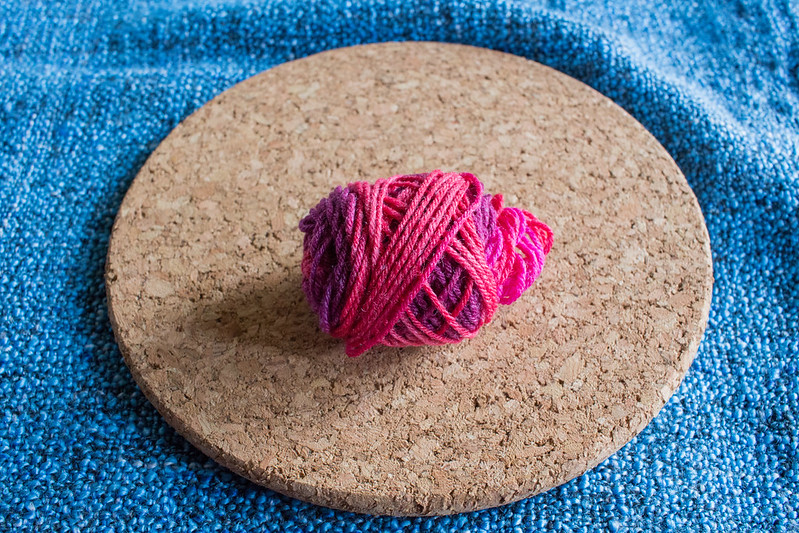 Silk blend yarn is one of my favourite treats for myself. I’m not sure that the stitch pattern really showed off the drape at all, though: 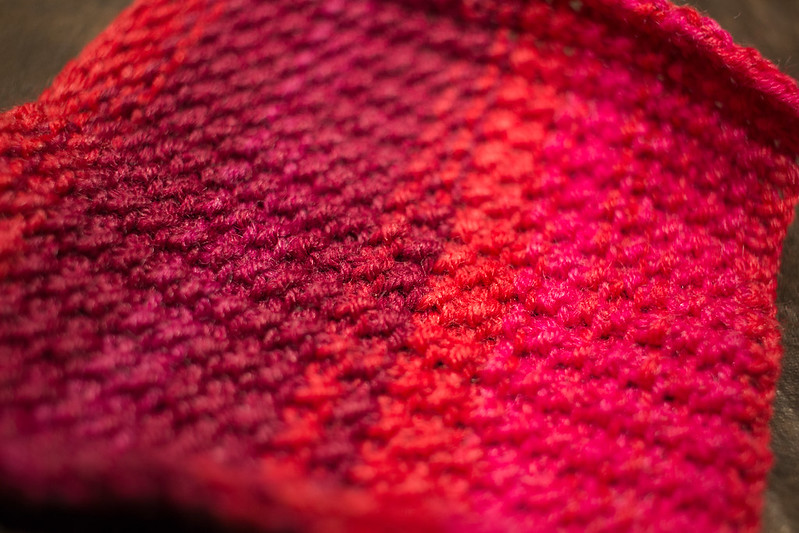 It’s kind of a bumpy rib pattern with twisted stitches. It’s quite dense and doesn’t drape at all! What’s neat about this pattern is that it’s very reversible and feels completely different on both sides.

The bumpy rib side: 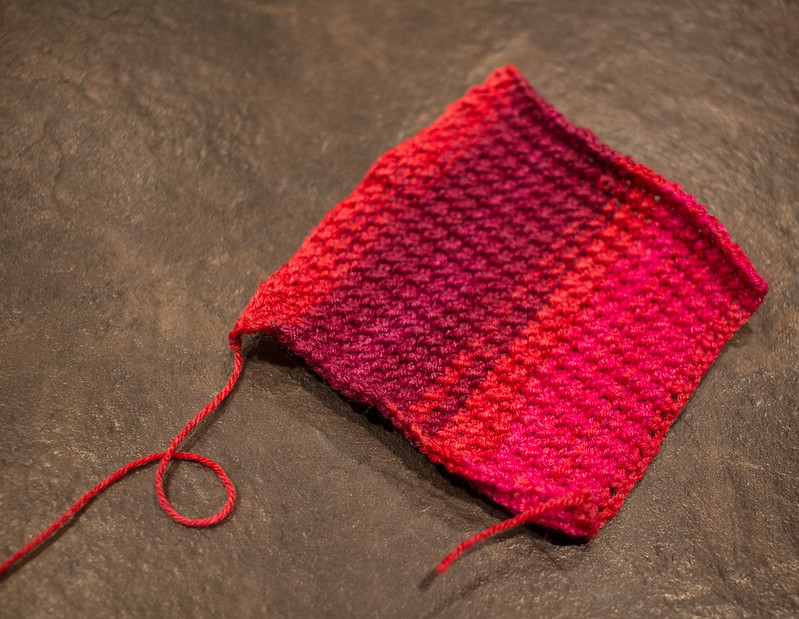 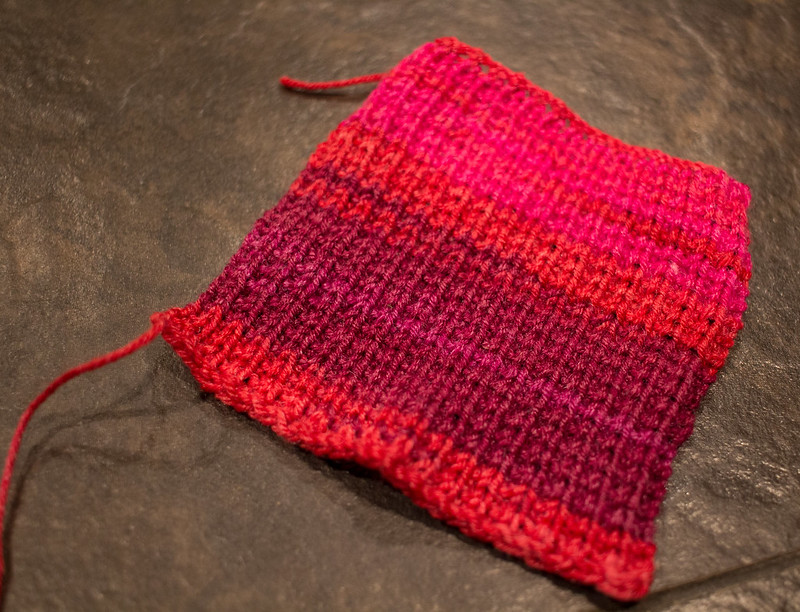 The smooth side is where this yarn really appeals, since it’s got that little bit of silky slippery-ness.

I would strongly consider using this to replace ribbing on worn items like sweaters and mitts, since I like the look of the one side and the feel of the other.

The one thing that this pattern does show off is the yarn’s stitch definition: 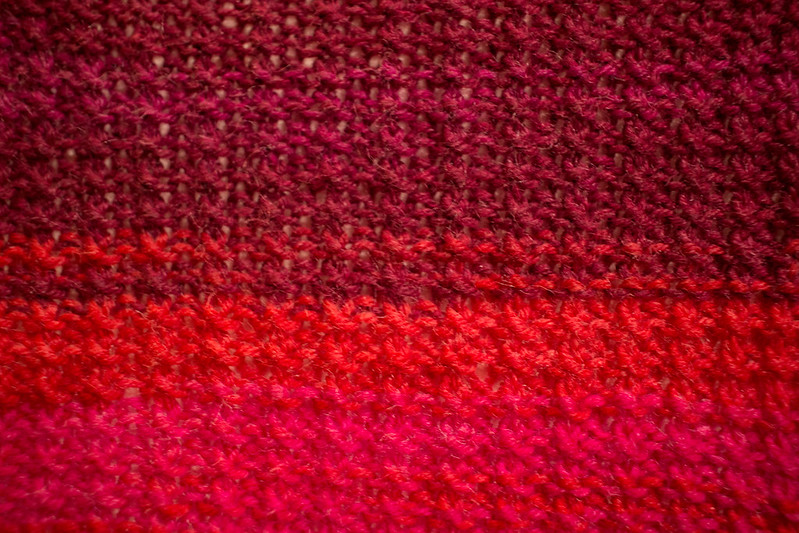 Overall, I liked working with this yarn a fair bit: it’s soft, easy to work with, doesn’t snag too much, and the results are reasonably striking. I do wish I had a way to see if I actually like the drape, but I enjoyed the swatch pattern so much that it’s hard to really mind.

Heck yeah, they sound lovely. But while I can afford more, this seems like a good balance of price and quantity for me. I think I’ll aim to spend money in my local yarn stores (there are so many here!) rather than risking it on a larger subscription at the moment.

Am I happy with this month’s box?

Heck yeah! I *loved* making the swatches. I’d never done any of those stitch patterns before, and I’m glad to add to my repertoire. And I’m glad to have tried all the yarns, although I’m not sure I’d run out and buy more of any of them unless I had a specific project in mind. But I really like having samples of them all so I can tell if they *would* fit a given project.