A local designer (PDXKnitterati) started advertising her February Knit-a-long (KAL) and I thought I’d give it a try. It’s an excuse to try out one of her lovely patterns, to take more pictures for sharing (I definitely need more practice photographing my knitting projects to best effect) and there are even prizes, which is fun. This one came at just the right time for me, since those rainbow socks (see previous post) had been almost ready to come off the needles and I needed a push to get them done.

I’ve never tried a KAL before, although I guess I did have a mutual “create as many crocheted angry birds as possible before PAX East” pact with my friend M one year, which I guess is sort of similar, maybe?

Feb 1st, I gathered up my ingredients… The pattern I’m using comes out of the Knitpicks “under 100” (as in under 100g of yarn). 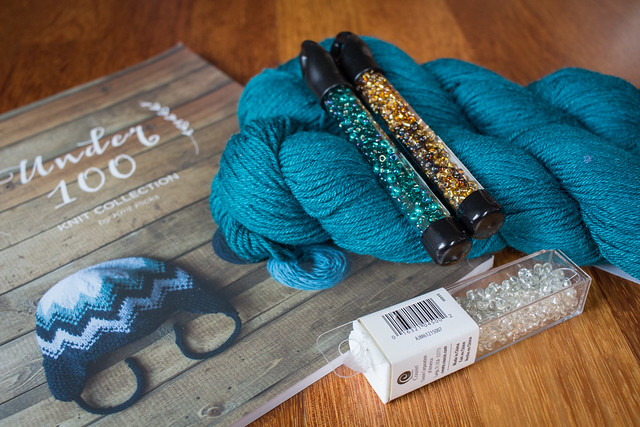 The yarn is Knitpicks Gloss fingerling in the Kennai colourway. (Two 50g hanks, you see?) 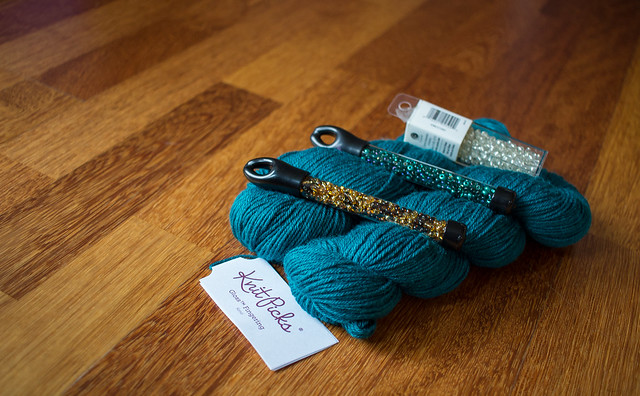 I had 3 bead options, all of which I liked. At a suggestion, I tried a swatch with them all to see which ones worked best for me: 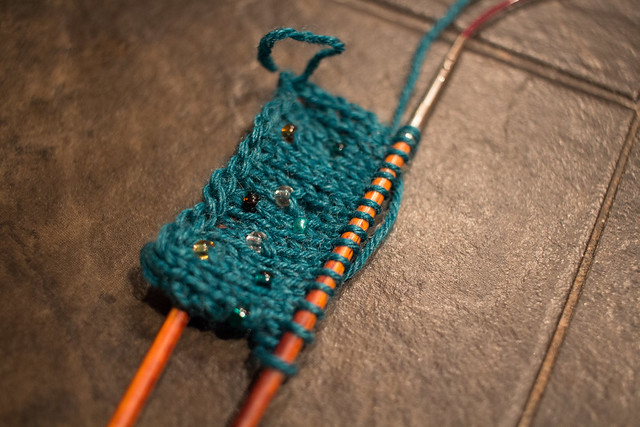 The silver and gold were clearly better than the blue/greens (which barely showed up) but what really decided me was thinking of ferns and what the fruiting bodies look like: The pattern beads are designed to go in the center, but I liked the idea of brown to remind me of real ferns anyhow. Perhaps someday I’ll work on some fern lace with pairs of beads, though! 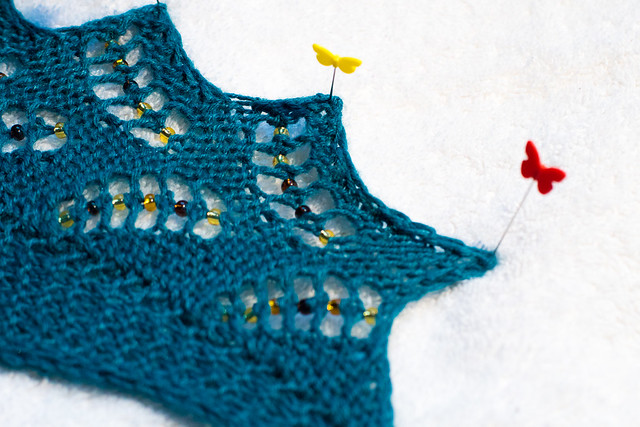 After a few false starts and times where I had to rip back to where I went wrong, I finally made it through a few repeats of the pattern. Here’s how far I was near the end of the first week: 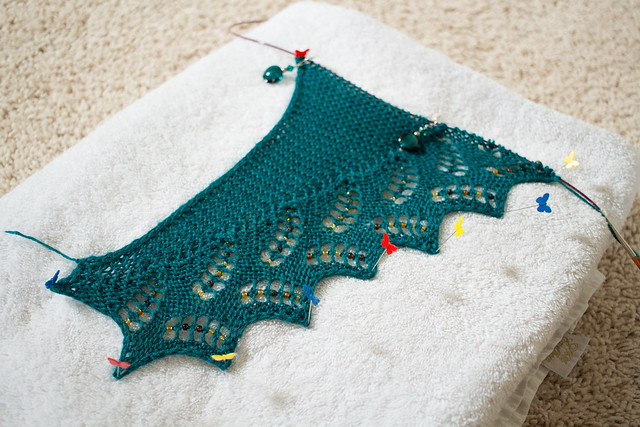 I guess I must have been tired since I blocked it upside-down. Thankfully, that doesn’t matter!

Now that we’re at the end of week 2, I’ve gotten much further! Here’s one to show the current length. 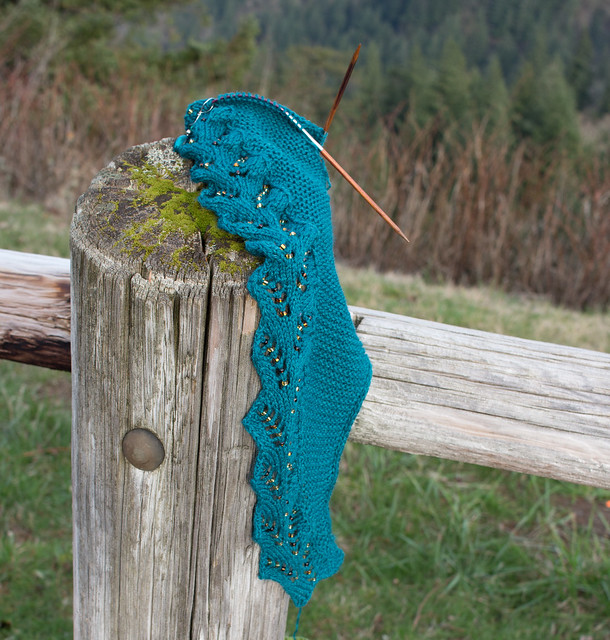 I was actually the lucky recipient of the week 1 prize, which was a pair of bead aids. This has made it way easier to put on the beads, as previously I was using a teensy crochet hook that didn’t quite grab all the yarn, so sometimes it would take me 2 (or more!) tries to get the bead on. The bead aids are much easier to get right, so that’s helped a lot. Here’s a wingpsan-y view to show the beads and the detail of that blocked tip while it’s rightside up! 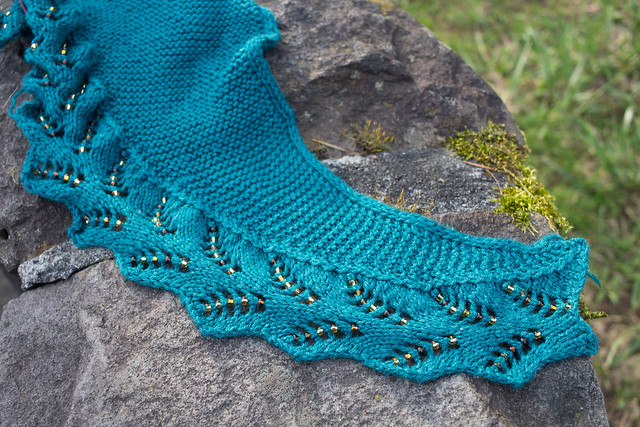 And finally, here’s a photo with real live ferns! 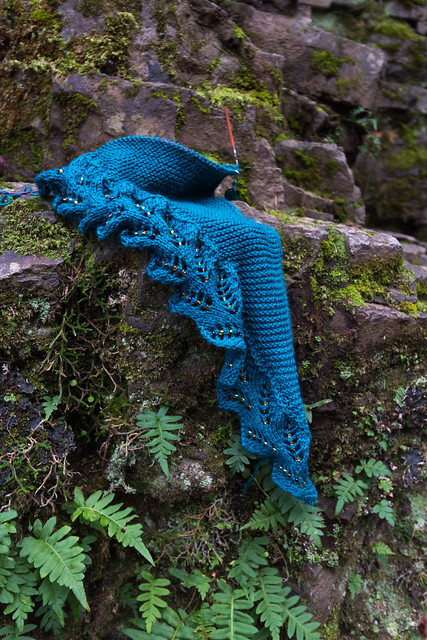 Those last photos were taken along the Columbia River Gorge, since we have an out-of-town friend visiting and since she’s a photographer and it’s been a gorgeous weekend, we’ve been trying to hit some prime photo spots. So to round this out, here’s a picture of the famous Multnomah Falls: 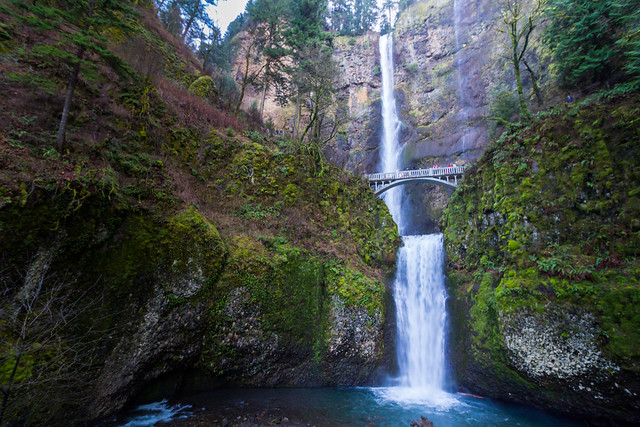 It’s a bit of a unusual photo because the falls are usually photographed vertically to show off how tall they are. I was showing off my new very wide lens to my boyfriend, which is why I took this one, but I kind of like it because it’s not a shot you see that much! (Sadly, I didn’t get it perfectly horizontal, so clearly I’ll have to try this again another day…)

Want more KAL photos? I have an album for them which has a few that I didn’t put here. More waterfalls will probably show up in my flickr photostream shortly as I process the weekend’s photos.