My friends are having their 2nd child, and since I actually kind of love making baby sweaters (so small! so cute!) I decided to prepare something to welcome her into the world. 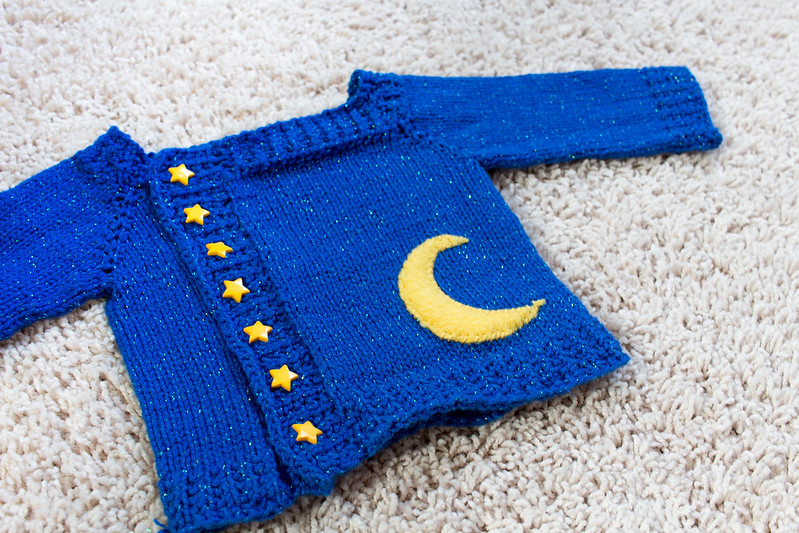 This sweater is actually the first thing I’ve made from my Rose City Yarn Crawl haul. The yarn crawl is a whirlwind weekend++ of yarn shopping. This year (2015) there were 15 shops in the Portland area participating. Believe it or not, that’s not even all the yarn shops in this area! I convinced a friend of mine to come out to Oregon for a visit just to do the crawl and have an excuse to see parts of the area I hadn’t visited yet.

I went a little overboard with the buying, since you got a free pattern (sometimes two!) in each store with purchase. But they had so many neat special “trunk shows” on and so many lovely yarns I’d never tried before, so I kind of bought a year’s worth of fun new experiences for myself, and I don’t regret that at all. Can you spot the yarn I used in the photo of my whole Rose City Yarn haul? 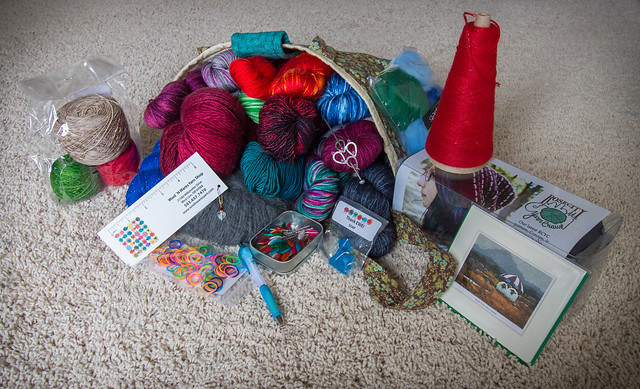 The yarn is Cascade Sunseeker, a 47% cotton/48% acrylic/5% metallic yarn blend. Colourway is “Nautical Blue” (22). The blend is a bit less stiff than many cottons, and less scratchy than many sparkly yarns. It’s not the softest thing I’ve ever worked with, but it’s got a nice balance of feel, look, and easy-care. And strangely, although Cascade is a very popular yarn mill, and I’ve made at least one pattern from their popular books, I think this may be the first thing I’ve made with their yarn! (but not the last: I even have another project completed from another blend of theirs, but it’s a christmas present so you won’t be seeing it for a while!)

I knew at the time of the crawl that I’d be making a baby sweater, but I hadn’t decided what it was going to look like exactly, despite having queued up a bunch of patterns so I’d have some idea of what yarn requirements I had for each. But when I saw the blue sparkly cotton yarn, I knew I wanted to try it for the baby sweater. Starry sweater! 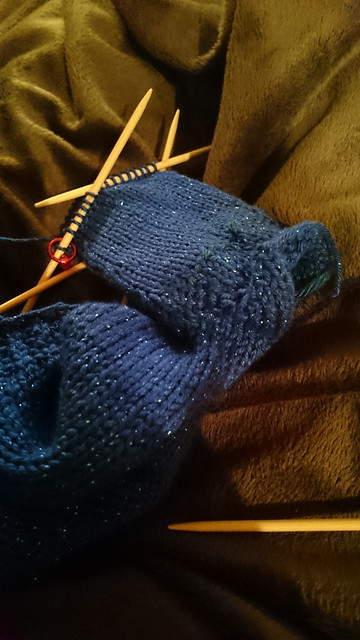 (I might just love stars. Hey, that second photo was taken on a trip with dad K!)

The dad of the incoming baby once said he’d like me to be a force for science in his kids’ lives. I don’t get to see the family much since I don’t live in the same country any more, but I try to think about that when I prepare gifts for his family. This has been awesome because it gives me an excuse to look at science toys everywhere and claim it’s research for the kids. (Most recently at the big Maker Faire in San Mateo!) My gifts haven’t been all that science-oriented yet since even the eldest is a bit young for some of the building toys that I’d like to get her. But that blue yarn said space, and astronomy is science, so thus the sweater was born!

This pattern has a big warning saying it’s not tech edited, but lots of people have figured it out and I didn’t have too much trouble with it. I do remember there being something a bit weird about the way they handled the ribbing: I think the pattern was done where the ribbing is written with the right side flipping, so in one section you’re purling where you knit in another section, and it seems confusing or wrong until you sit down and work it through.

I made some changes to do a more mistake-rib style ribbing on it in the end, because I liked the way it looked in that yarn in my test swatch. That change was a bit annoying to translate because of the way the pattern reverses things so I had to flip where my twisted stitches were, but I figured it out.

The one thing I should say is that you should pay attention to the number of stitches you pick up for the front panel. When I picked up every one, I got this:

So I had to rip that back and try again, skipping a few stitches when I picked up to make it straight.

I had originally planned for there to be a big star on the side of this sweater and then regular buttons, but when I saw the star buttons in the store I changed my plans: 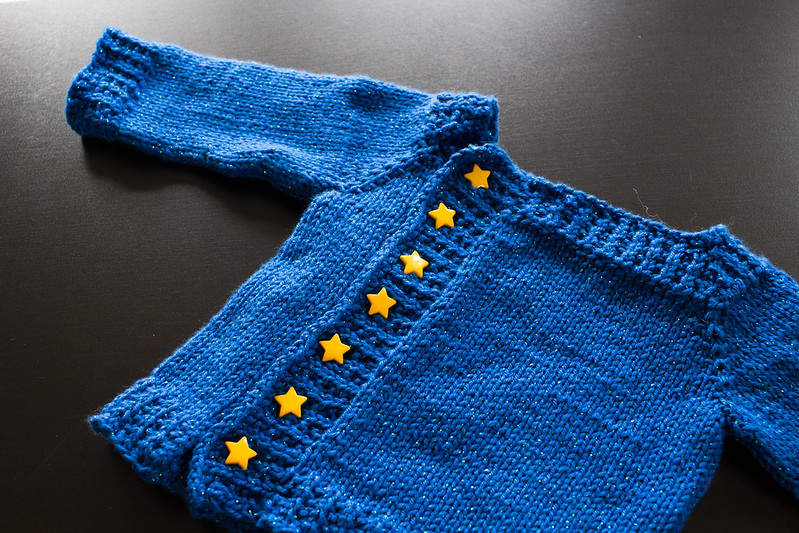 How cute are those?

I do feel a teensy bit guilty, though, as they’re a bit annoying to use in conjunction with the ribbing I chose. If I’d planned in advance, I could have chosen an edging that was smoother. But they’re so cute, and even after I realized the flaw I figured the cuteness was worth it. At least my friend’s a photographer and he’ll likely get a chance to admire the cuteness in family photos long after the experience of actually using the buttons has faded? (Dear K – I will not be offended if you use this as a pullover after trying to use the buttons once, and I’m sorry I sacrificed function for form. But they’re so cute!)

But now I had a problem. If I put a shooting star on the side as I’d originally intended, would it be just too repetitive? Would I have to futz over making the star exactly match the buttons or it would drive me crazy?

I could have just left it as an offset sweater without appliqué, but that’s such a big space on the side there…

I’m not the one who hit on the solution. I think it was either my friend M or my sister when we were on Teamspeak playing diablo/knitting/gossiping who suggested the crescent moon:

And that’s at the point where it went from “Small Starry Sweater” to “Baby Astronomy Sweater.”

I was reminded that it’s a bit annoying to sew something perfectly smoothly onto unfelted knitting because the stitches provide texture that doesn’t line up with your appliqué, but I decided to go for “look handmade” with chunky embroidery stitches. It’s baby clothes, so it’s bound to get messed up anyhow! I do hope this one get re-purposed to doll clothing or something, though, it’s so cute and it’s a shame that at that size, it may only get worn once or twice before it’s outgrown. Ah well, that’s the risks of making baby clothes!

I’ve never really added clothing labels to the things I make, but I saw these cute “fait avec amour” labels on Knitpicks and thought they were too cute to pass up. I always am pleased when I see French down in the US at all, and the baby this is for has lots of francophones in her family tree!

And while I was at it, I figured I might as well add a washing instruction label. Never hurts to be sure of how you should care for a handknitted piece, although knowing her dad it was bound to be machine washed and dried no matter what! 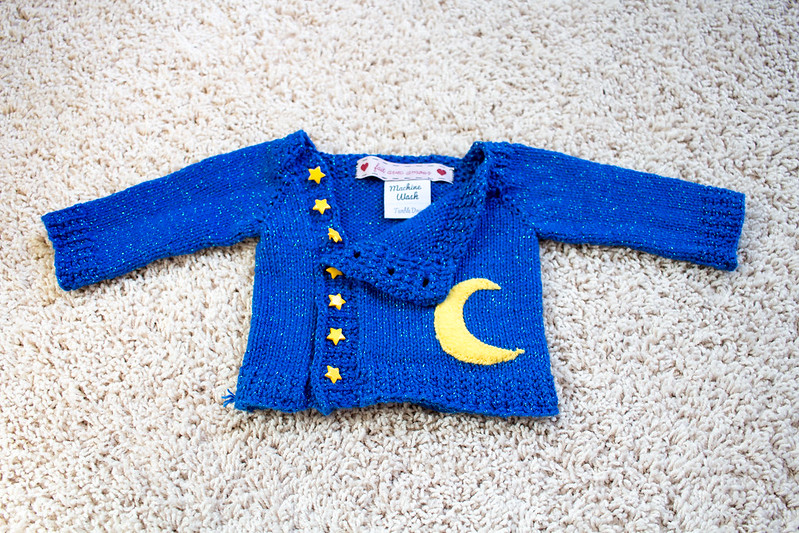 The sparkles in this are absolutely amazing in person, and the yarn was easy to work with. I love how it holds crisp corners, so I think it was a good fit for this pattern even though there exist softer cottons I could have tried.

Despite the dire warnings about tech editing, it’s not bad. Not entirely beginner-friendly, in my opinion, but fine if you don’t mind thinking your way through it and have enough experience reading patterns to do so. I love the shape of the final project with the wide neckline, and I liked the way it left space for my own themeing. You could make hundreds of these and not feel like any of them were really the same.

When I gave this to the family, big sis was kind of upset that this sweater wasn’t for her. (I wonder if I could scale up this sweater to her size and do it in some other pretty yarn…) It may be just the grabbiness of a (then) almost-two year old, but I take it to mean that the baby astronomy sweater is an object of desire. That’s good, right?

Whims of almost-two-year-olds aside, I liked this and will almost certainly make this pattern again!