I’d planned to just do the knit-a-long for the Rose City Yarn Crawl, but then I went out to a knitting group and saw what the pattern for the crochet-a-long looked like… Not only does it look lovely all crocheted up, but the pattern itself has the most gorgeous crochet charts I’ve ever seen. Colours to distinguish rows! Highlighting to show you where pieces should line up with rows below! Careful layouts to make everything easy to read! One of the reasons I learned to knit (besides needing something to do on the 3hr long car ride to the Very Large Array) is that there are so few good crochet patterns and learning a similar craft was the easiest way to expand the range of patterns I could do. So it would be a shame to know of such a nice pattern and not try it out! 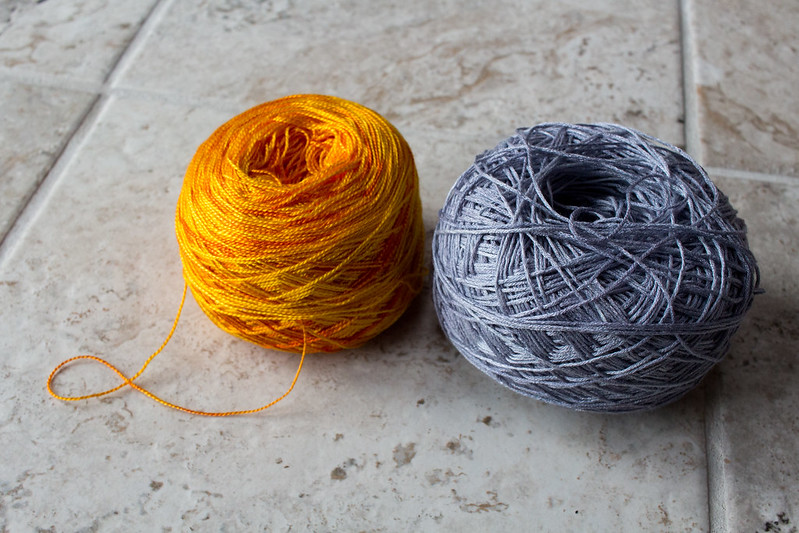 I’d been so good about using stash yarn for the MKAL that I decided to treat myself to something at Black Sheep for this one. These are both from Teresa Ruch, a local dyer who works with synthetic fibers and uses amazingly saturated beautiful dyes. The yellow-orange ball is Tencel, the grey is bamboo rayon. It’s a neat combo because the tencel is much shinier than the rayon, so there’s a serious contrast between my two colours. And it’s a nice excuse to try some different synthetics, since I’m always on the lookouts for allergy-friendly options.

Here’s a teensy peek at those charts I’ve been raving about: Not only are the charts clear, well-written, and easy to follow, but the “flavour” of this pattern is cake, so it’s described in layers of cake and icing. People in the thread have been naming off cakes to go with their colours, and it’s awesome. I’m calling mine creamsicle mousse.

This pattern is named after Rimsky-Korsacoffee house, one of the local places that takes “keep Portland weird” as a personal mission. Also, it has great cake.

Clue one included a layer of cake and the first layer of icing: 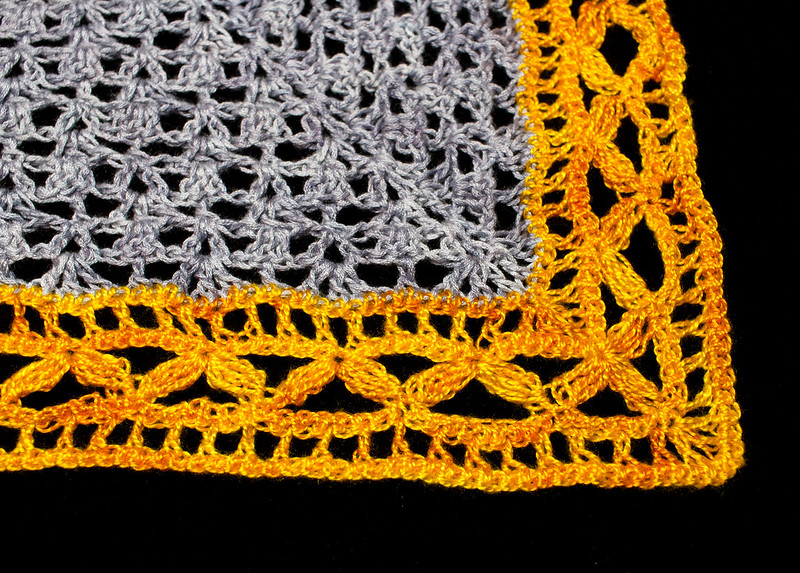 It’s approximately kerchief-sized at this point, and a bit to fit into my photo lightbox unfolded, so I kind of need natural light to take pictures of it (my flash is somewhere in a box from the move). 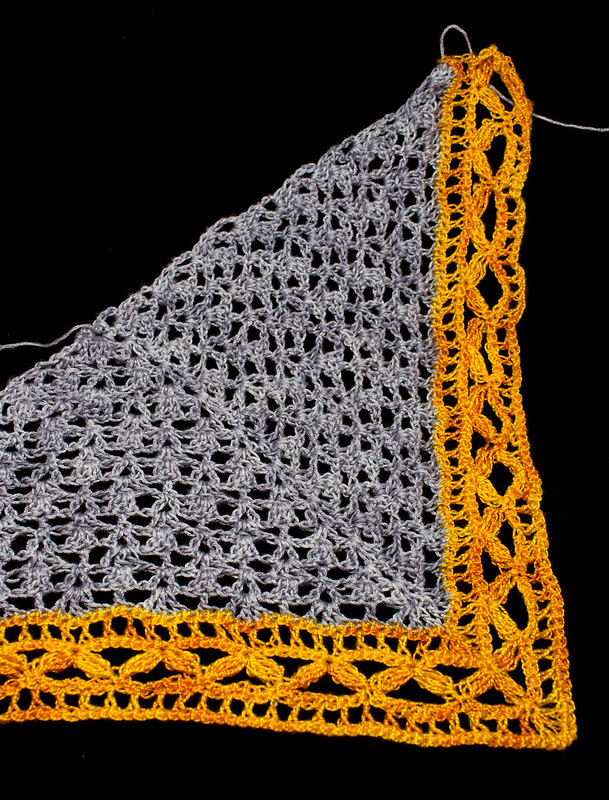 Clue two, also included a layer of cake and layer of icing. The icing is pretty similar, but the cake is quite a different stitch pattern! At this point, it’s starting to really look like a shawl: 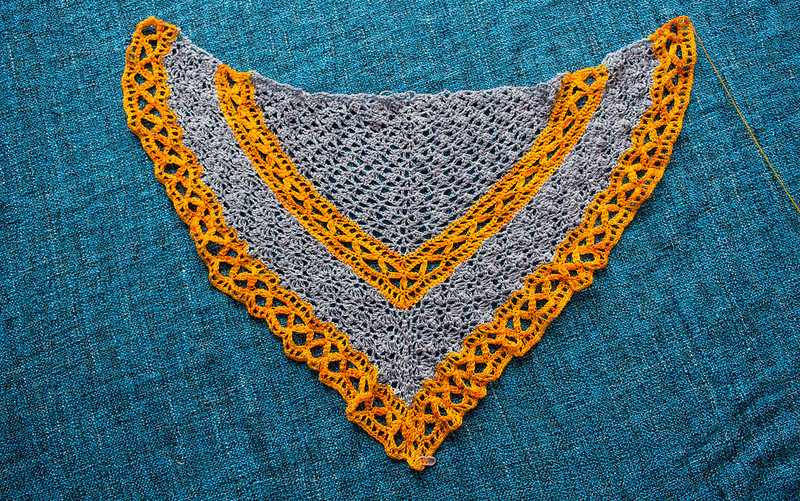 And a close up: 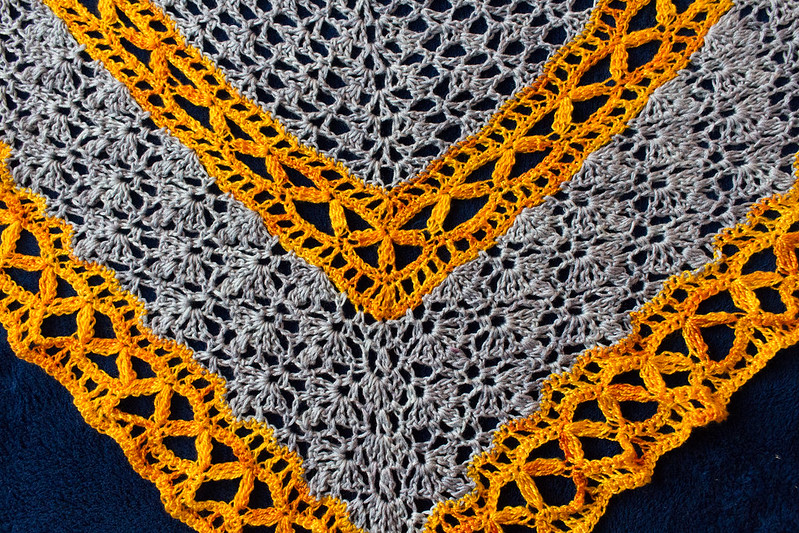 This is the first larger, non-amigurumi crochet project I’ve done since I got some “ergonomic” crochet hooks, and I’ve got to say that it makes a difference. My right hand doesn’t get tired nearly as quickly. In fact, it’s usually my left that gets tired first now! If you crochet at all, I highly recommend investing in a set. It doesn’t even have a very expensive investment: They are cropping up at absurdly cheap prices on amazon and elsewhere, maybe $10-15 for a set of hooks with a case and sometimes with some stitch markers or other notions thrown in. I have a set from clover that has a significantly more expensive list price (I got it on sale) but I honestly can’t tell the difference between it and the cheaper sets. I do admit I haven’t tried crochet with the cheaper ones for any length of time, though.

The only weird thing about these hooks that they don’t match up with the sizing of the other hooks I own, so my new G hook is a bit smaller than my old one (4mm vs 4.25mm). Thankfully, it seems to be working out fine on this shawl.

Doing both the MKAL and the MCAL was probably a bit too much, since it’s meant that I haven’t even touched my January Beanie Bags or YOTM samples, let alone the February ones, but I’m really excited about the final piece taking shape, and it’s kind of neat to be doing the less-common one. The last clues came out this past Wednesday and my deadline for the shawl is when the Crawl starts in two weeks, so it’s looking like I’ll be able to finish both without much trouble!