Astute readers may note that I’m doing the December YOTM review but still haven’t done the Beanie Bag full review. That’s because even though it’s January I still haven’t knit up anything with any of my Beanie Bag yarns. How embarrassing. Now, I could blame a busy holiday, but I the answer is much simpler than that: I don’t know what to knit. Without a recommended swatch just sitting there in the bag, and a combo of yarns to choose (remember, this was the “try two held together of different types!” package), the barrier to just sitting down and doing it is a lot harder. What needle size should I use? What should I knit? Which combo of yarns? Should I try the included headband pattern even though I barely ever wear headbands? This isn’t a “grab all the supplies and throw in purse” kind of project and apparently that’s a barrier.

This isn’t an unsolvable problem, of course, but since the idea behind doing tiny yarn samples was that I wouldn’t have a huge backlog of unused yarn, it’s a bit distressing to realise that not having swatch patterns in the bag makes such a difference. I’m approaching the end of my self-imposed “I’ll try this in 3 months and then decide” and I’m torn. I love the packages, they feel like a serious treat and I like the way each one has a theme that involves teaching you about fiber, and I like taking pictures of them, but if I’m not using them, I should probably give up and move on.

So expect some experimentation on that front soon! I’ve grabbed some stitch dictionaries and a set of interchangable needles and queued up an episode of Dr. Who, but there’s a percent chance that what you’re going to see next is a bunch of tiny octopi.

Anyhow, in the meantime, here’s the easy-to-use Yarn of the Month for December! 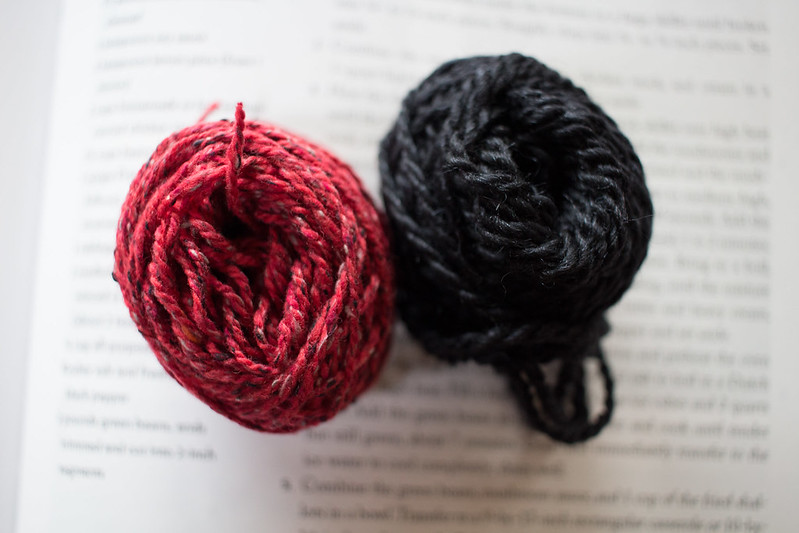 This month’s yarn was *super* posh. The black is fuzzy and soft, and the red is one of the nicest silk blends I’ve ever used. It was a huge contrast to the pleasant-but-unexciting superwash in my other yarn bag, which isn’t to say that the other was bad at all but wow did I ever want to play with these first! 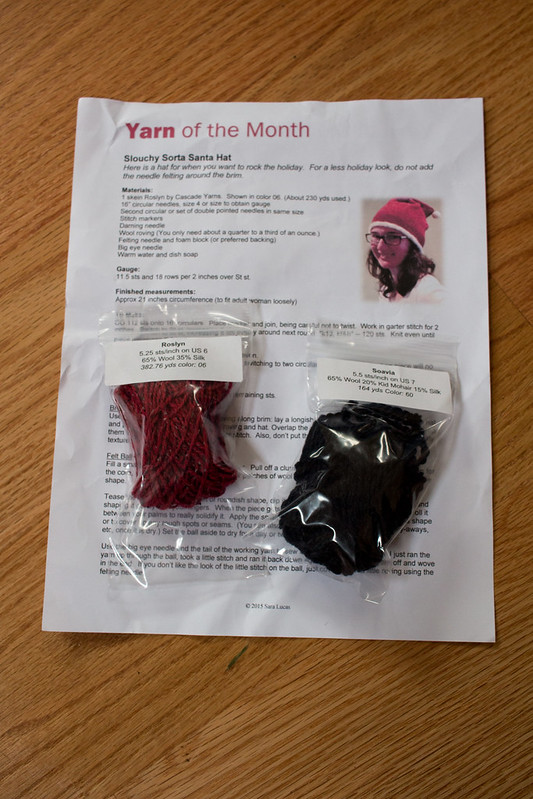 It’s a Santa hat! I think I might stop mentioning the patterns; I hardly ever use them. 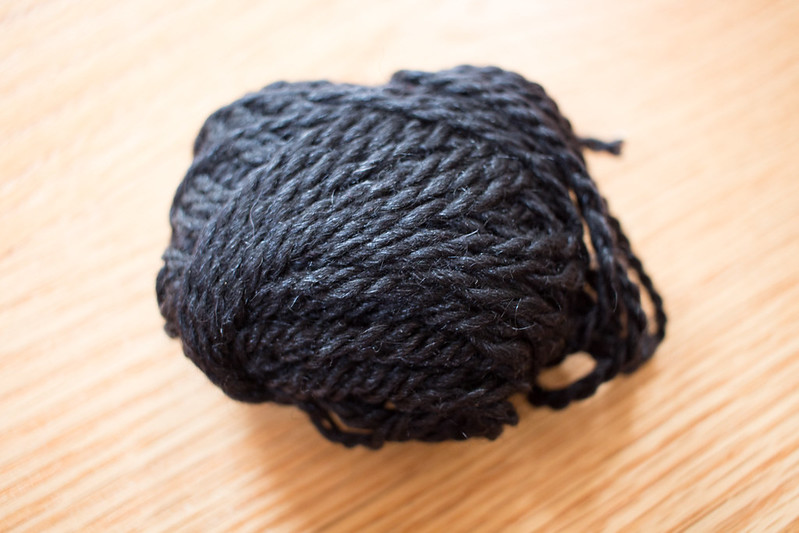 This yarn is plush and soft. You can’t tell too much from the photo, but it’s got a really pleasant halo and somehow manages a teensy sheen as well in person. It would make a positively lovely scarf or cowl, or anything worn close to the skin. It’s the sort of yarn you just want to sink your fingers into. 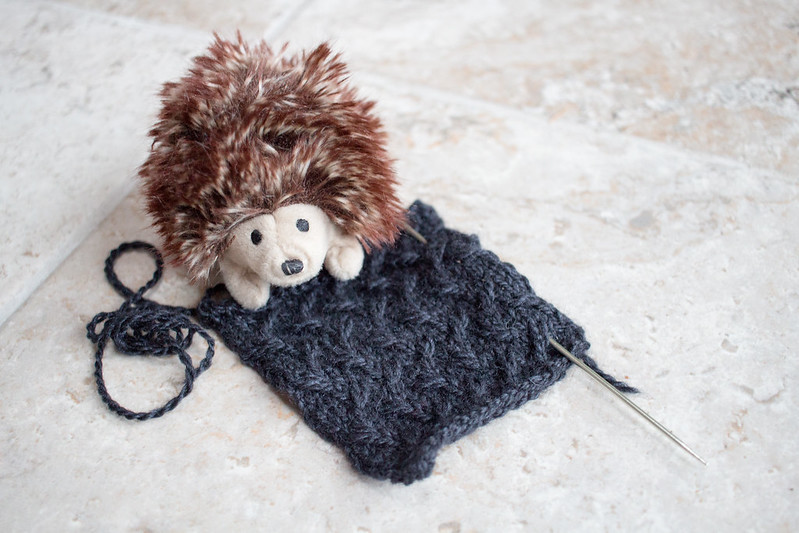 Given the halo, it’s pretty surprising how easy this is to work with (sometimes fuzzy yarns can be pretty temperamental). The stitch pattern with the long criss-cross thing really shows off the yarn. It’s soft even knit into tiny stitches, but those long ones are especially easy on the fingers. So very soft. It makes me want to do a bigger project with fuzzy yarns, even though it’s getting warmer and warmer here. 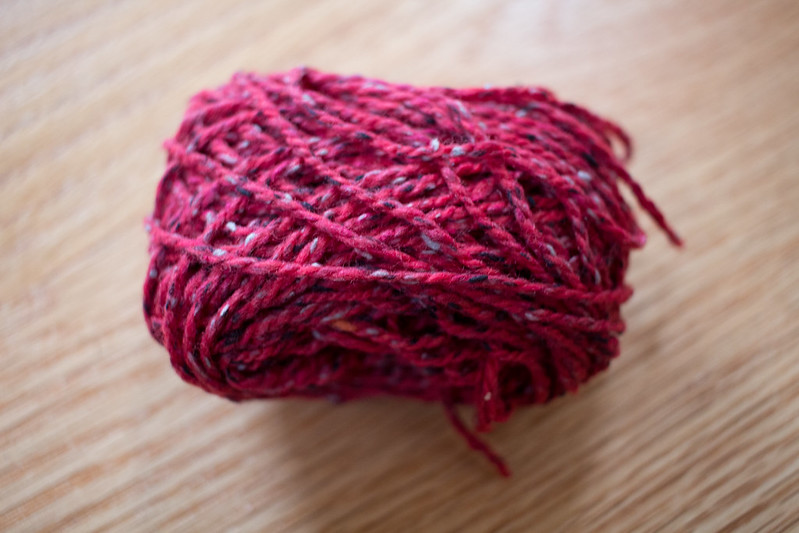 This is one of the nicest silk blends I’ve ever worked with. It’s flexible, soft, and feels like it would make amazing clothes because it’s a bit lighter than many wools. It somehow feels silky without feeling too slick. The heathering and colour is fun too. 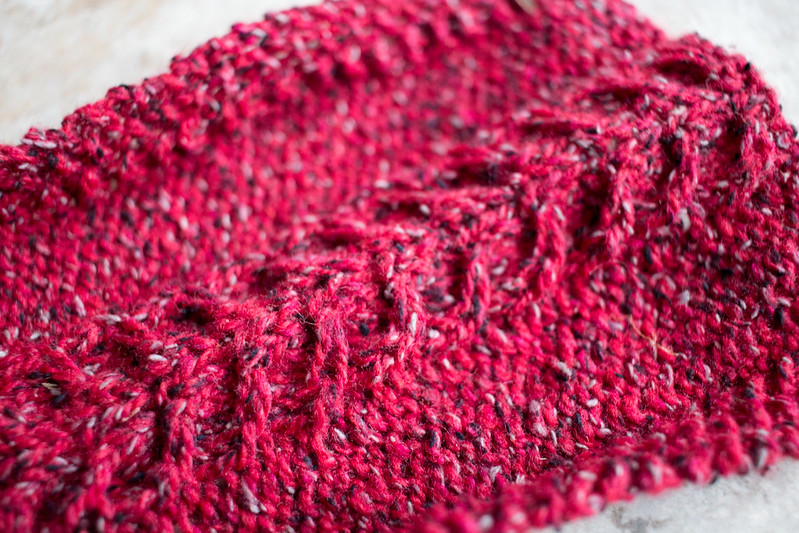 The stitch pattern is a pretty neat cable. Although I don’t think I got the sides quite even! Yarn was very easy to work with, the slight side-to-side difference is a me problem, not a yarn problem, and it might even block out. 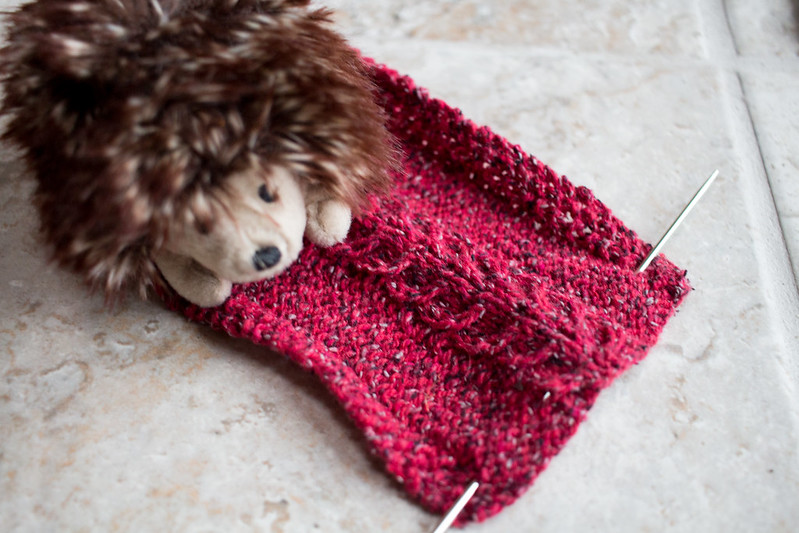 I was surprised to see that this yarn’s regular price is $15/100g because it feels like a much fancier and more expensive blend. Thank you Cascade for producing such nice luxury yarns!

December’s YOTM was a real treat, even in the face of me working with the super nice yarns I was using for presents in December. I’d definitely use either of these yarns again, and Cascade at least should be a thing I can find around here so I can check out the other colours. Guess I’ll keep an eye out during the yarn crawl!