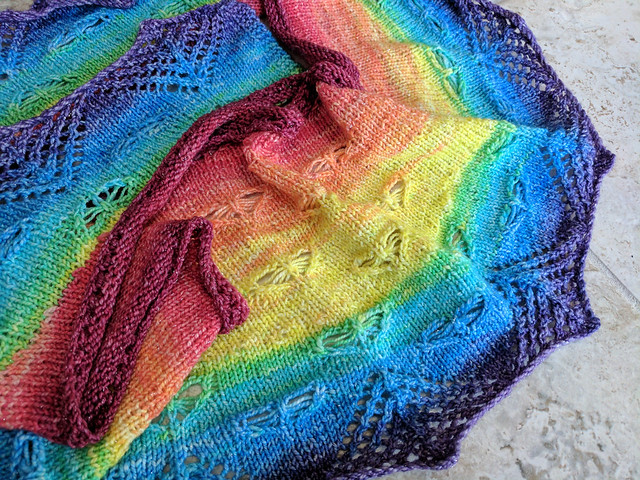 This was my second rainbow for pride month, because once you’ve accidentally started such a great theme you might as well stick with it! Here’s the two projects together: 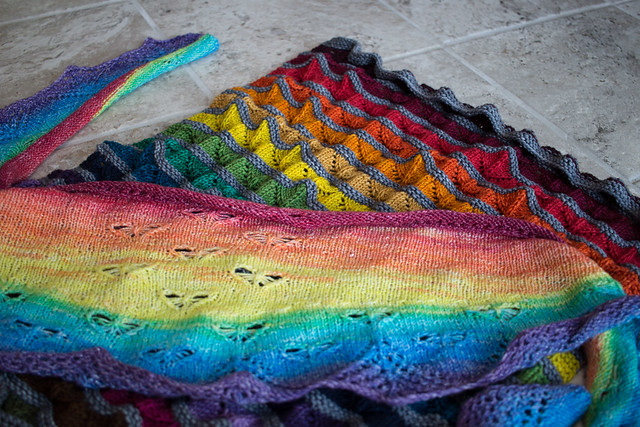 Bling Bling Sister, a sparkly rainbow gradient from Alexandra’s Crafts. Probably acquired at the Oregon Flock and Fiber festival. You can’t see the “bling” in all my photos, but there is a little thread of silver sparkle in there and it looks great especially as it catches the light. 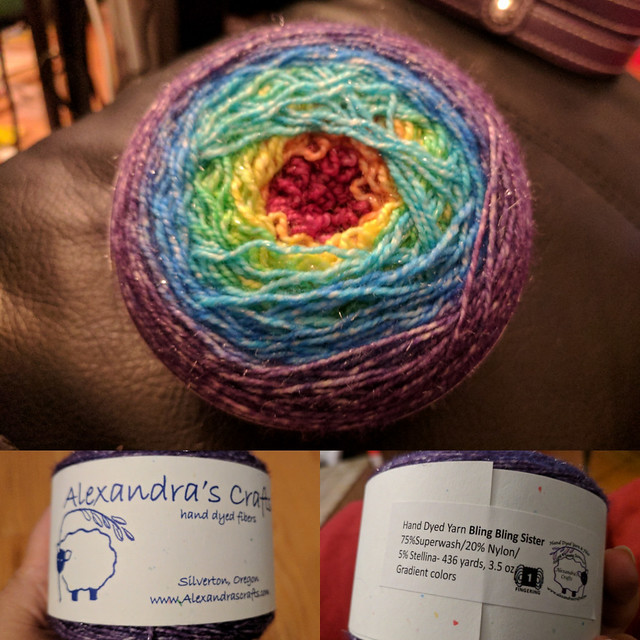 I’d been saving this yarn for something special and it didn’t disappoint. It’s a bit more kinky than the last gradient I used from Wollelfe (I haven’t written up that project yet, sorry!), so it really really needed blocking when I was done. Here it is looking lumpy in the PDX airport: 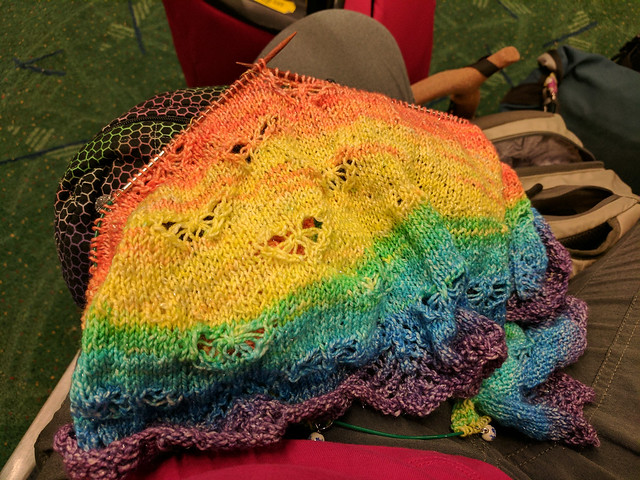 However, even a slightly inadequate travel “block on a towel in my mom’s living room” got it looking great: 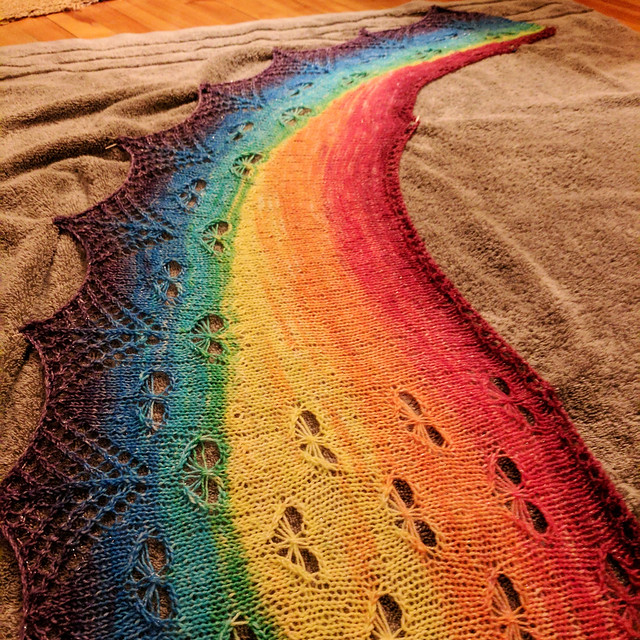 Go Tell the Bees by PDXKnitterati.

PDXKnitterati’s been one of my favourite designers since I first cast on her Fern Leaf Shawlette, which is still the bit of knitwear I wear most. (If you’ve seen me at a conference in the past year, I’ve probably been wearing it!) Her patterns are always beautiful, easy to read, well-tested, and she’s got lots that are in that perfect balance of complicated enough to be fun or to teach you a new skill, but with simple enough bits that I can still get lots done during standards meetings, on commuter rail, or hanging out in the hammock in my backyard. Or in this case, on the couch I gifted to my parents when I left Canada: 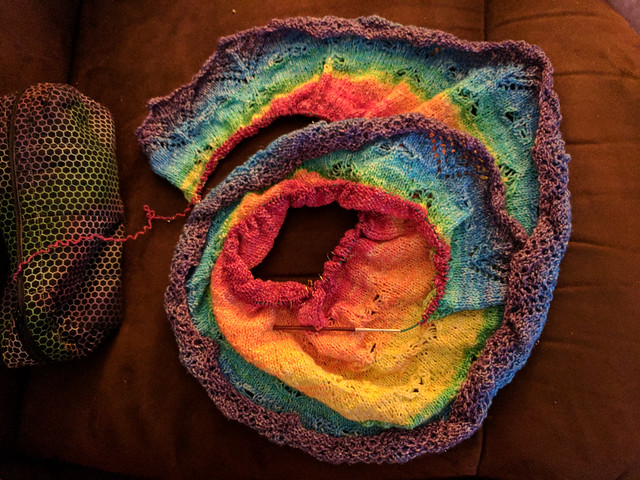 Also, if you ever get a chance, she runs really great knit-a-longs on ravelry for some of her new pattern releases. Her fans produce beautiful inspiring work and she encourages us all to post pictures and even awards prizes! (I even won some beautiful bee stitch markers and candles!) It’s really fun to be part of her community there for a few weeks. Here’s a picture to commemorate the excitement of my first bees emerging from the pattern: 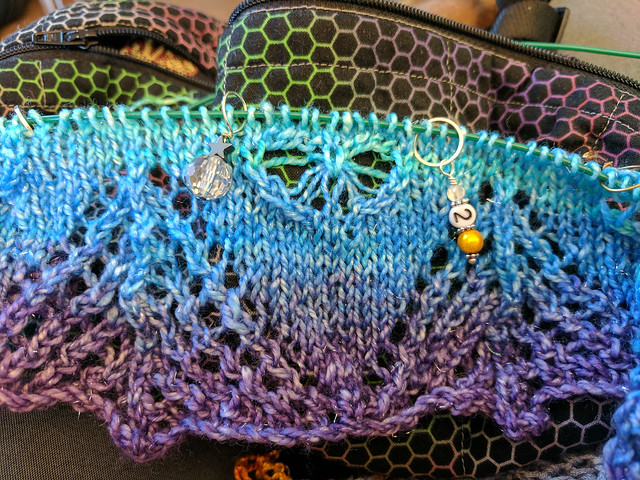 I’ve got quite a few more pdxknitterati patterns in my queue, and just going through these photos again has me itching to cast on something else from her catalog!

This one was cast on in Oregon and finished in Ontario, and it gathered comments from people across the continent because of the bright yarn and the great pattern.

From those first few rows: 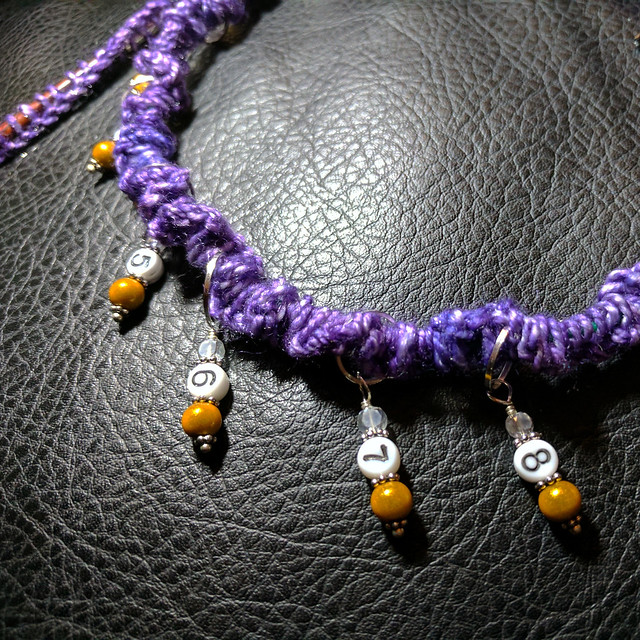 Through realizing I had a perfect honeycomb bag for my project thanks to my friend M: 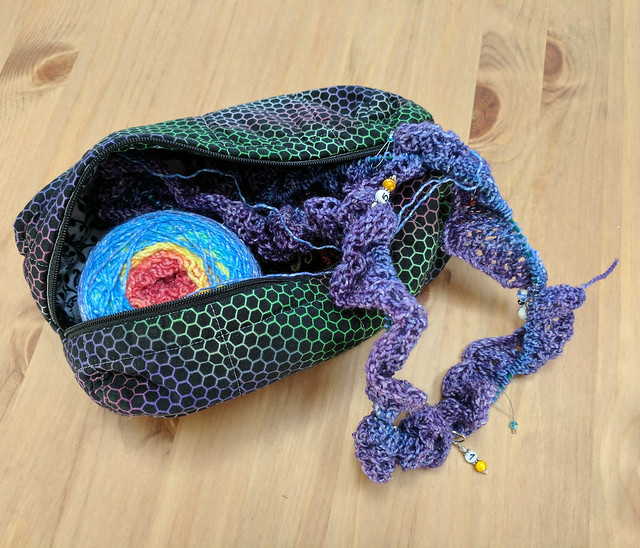 To taking finished object pictures in the light rain in Ottawa: 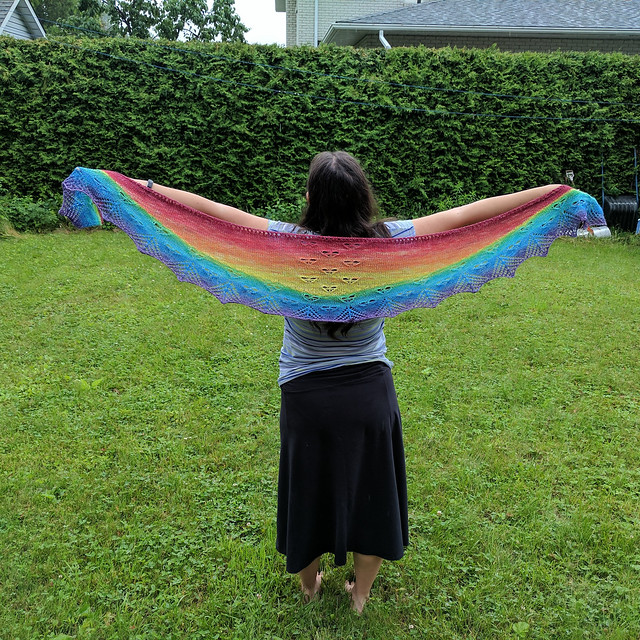 This one was a super satisfying project, and a beautiful finished object that is quickly becoming one of my favourites to wear.