This shawl is another part of my fall finishing spree, which was inspired by someone in one of my online groups asking how many WIPs I had. I took stock, then finished this one before posting my answer (which is probably cheating) and then started in on the gloves and another one I’ll post soon. 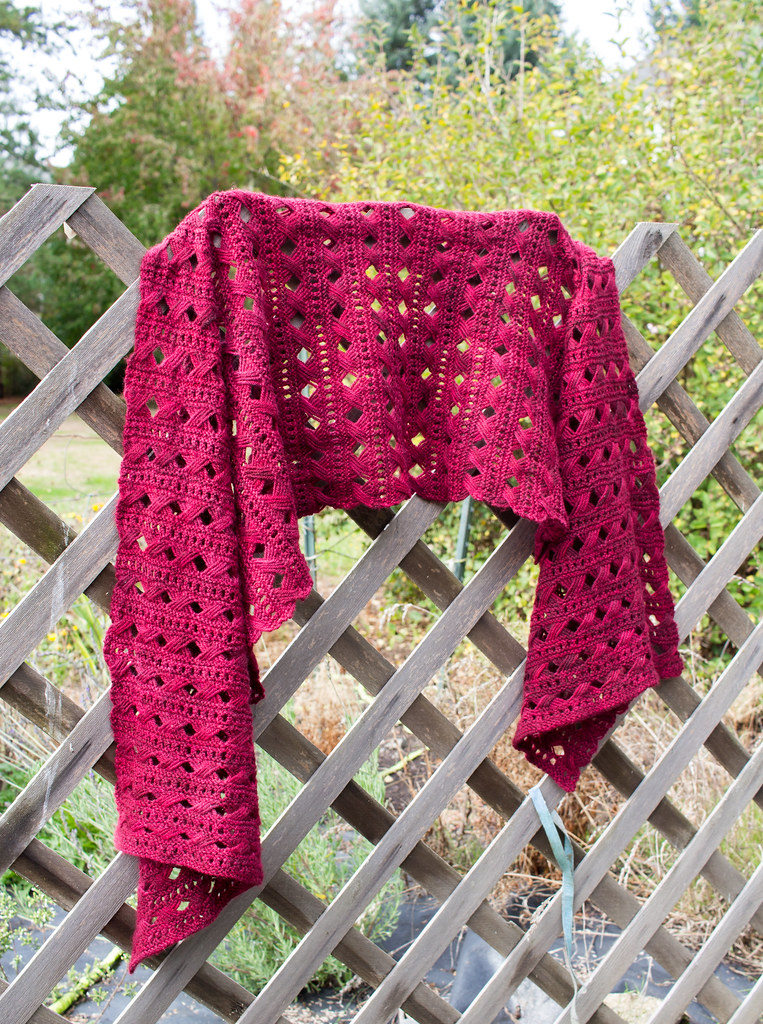 I saw this in the shop at Twisted and it’s very striking with those square holes, and I love the inspiration from Craftsman homes. Combine that with a local yarn, and you get a pleasantly local pattern. I suspect those are always an easier sell around here, since “buy local” is something that people really commit to in the PNW. I know I’m quickly becoming a sucker for pacific-northwest themed stuff, and I’ve only lived here 3 years. (But oh, when I step out into that misty fall rain, sometimes it feels like my heart’s been here forever.) 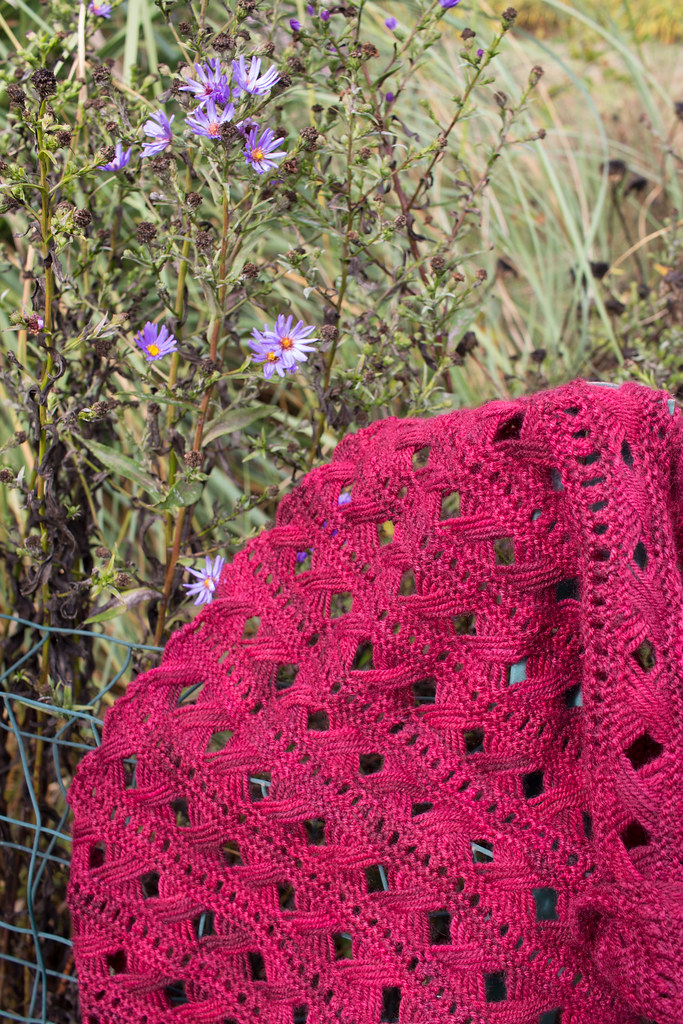 Pattern: Craftsman Shawl. While this pattern looks pretty ornate, it’s surprisingly simple, and has lots of straight-up knit rows which were very pleasant while I was on conference calls or watching videos or whatever. I don’t think it’d be a great beginner project, but it’s probably only a few steps up from beginner level. 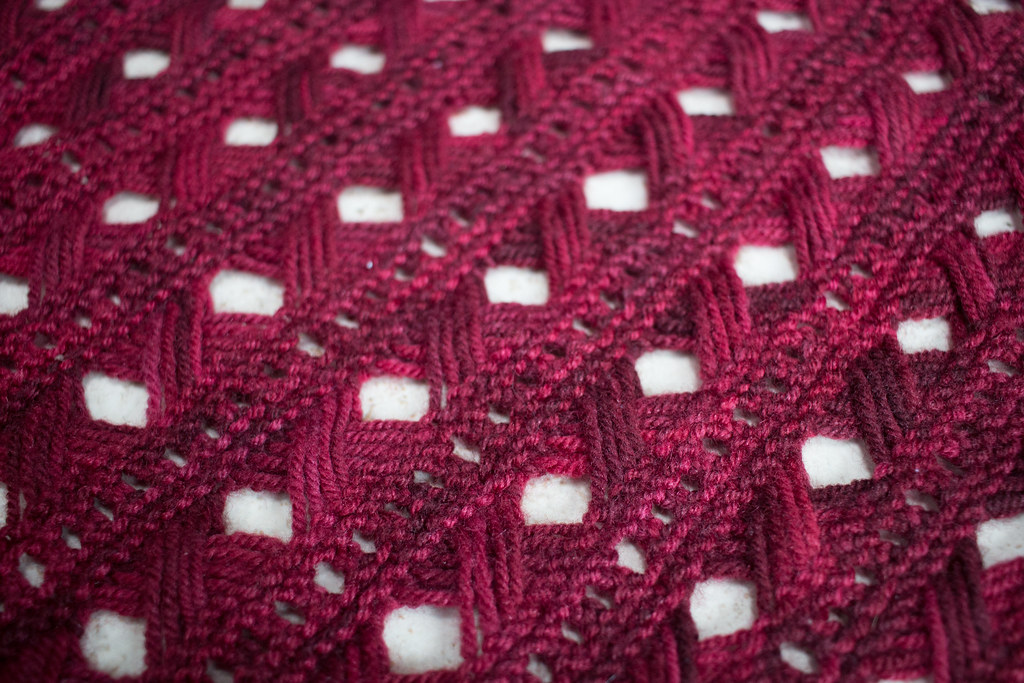 I love the aesthetics of the pattern, but once I got it finished, I was surprised to find that it wasn’t nearly as warm as I expected because the blocking opened up those big holes so it no longer trapped air as well as it did while I was knitting it. So don’t plan for this to be a great warmth piece. But it’s actually kind of nice as a mid-weight piece, and it’s more or less earned a place on my favourite chair for when the sun goes down and the living room starts to cool off. 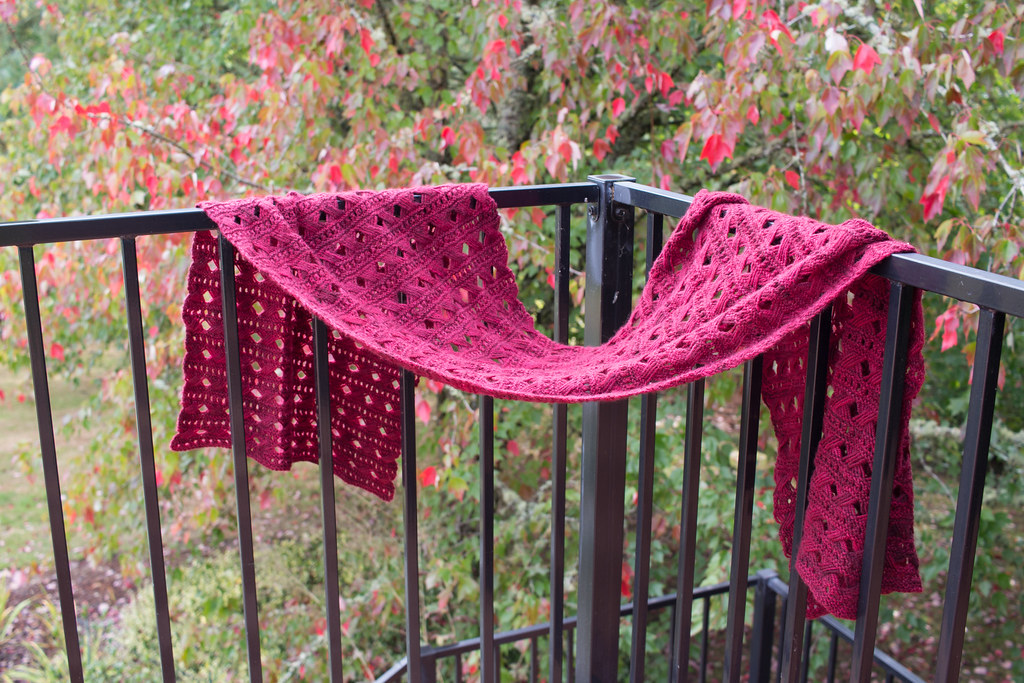 Yarn: Blue Moon Fiber Arts Silky Victoria. I picked this up also at Twisted, I think maybe using a coupon intended to get people to come back after the Rose City Yarn Crawl. Smart marketing, although the store is kind of picked over at that point. Twisted is one of the first shops I visited in Portland, and it’s still one I take yarn-loving visitors to because it’s got a nice selection of local dyers for your tourist yarn needs and gives me an excuse to drive across the city. 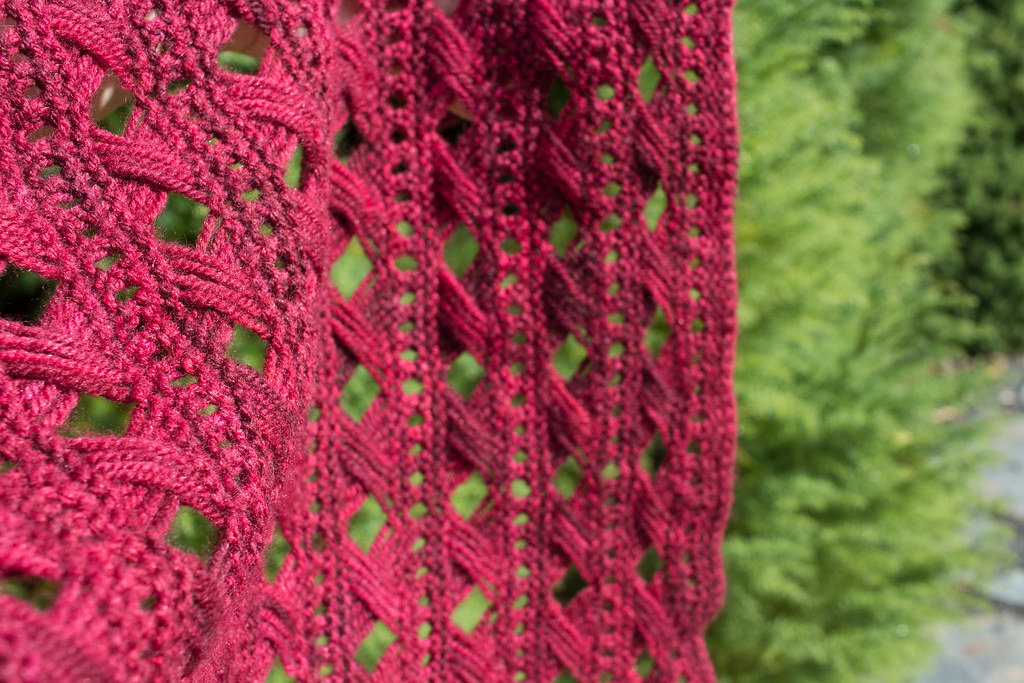 This was a *giant* ball of yarn. It’s soft, but still wooly, and doesn’t feel super silky to me (compared to my fancier blends) but it shines with that silky almost-sparkle. that’s really highlighted by the tonal reds. I’m a big fan of the Blue Moon colourways, and this is a pleasant base that really shows the rich colours at their best. It’s not one of those yarns that makes me immediately want to run out and buy more just because it feels so amazing, but their colours (and their hilarious names) always tempt me. 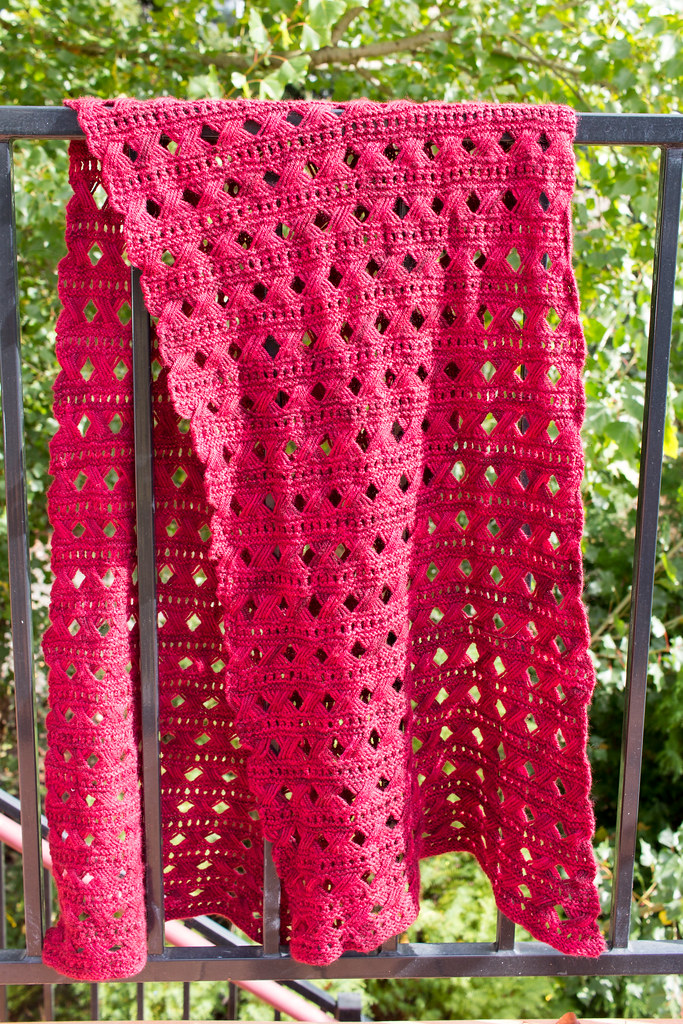 My project on ravelry, in case you want to queue up your own.

How am I doing on that finishing spree? I had 8 works in progress if you count this one, 4 are done, and I started and finished a 5th that’s currently blocking.

Two WIPs you know about are the abandoned cardipalooza cardigan and the dreaded second glove from the catch a falling star MKAL. I’ve got two more WIPs that I don’t intend to finish right now because there’s pattern rework to be done.

But then I started a hat this morning because I needed a purse-sized project that wouldn’t poke holes in things (the needles for those fingerless gloves are deadly) and the new yarn from the flock and fiber festival was calling to me. So I’m currently at 3 in progress, two stalled. Good thing I’m not *too* worried about having a few things on the needles at once!